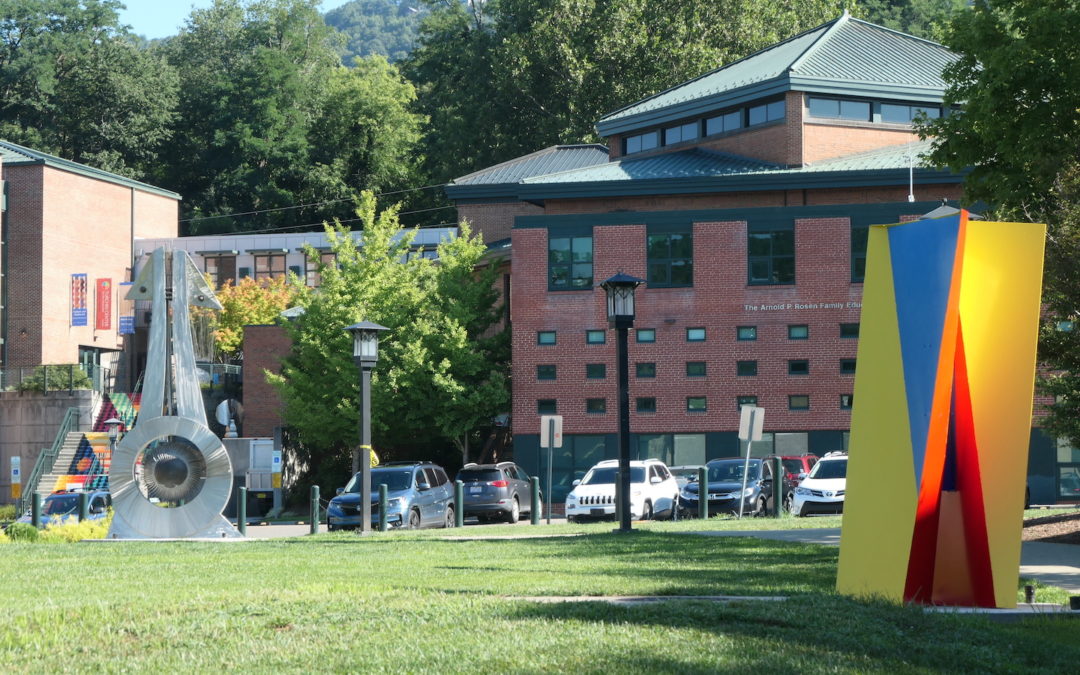 Boone, North Carolina – Sculpture has long been a dynamic element on the campus of Appalachian State University and as of late August 2022, a new collection of seven sculptures created by artists from across North Carolina has been installed as phase one of a Campus Arts Corridor. The sculptures originate at the Turchin Center for the Visual Arts on King Street and extend into campus along a public art pathway.

The concept of the Campus Arts Corridor arose out of a desire to visibly link App State’s arts related venues. Two of the main university arts centers — the Turchin Center for the Visual Arts, and the Schaefer Center for the Performing Arts, are located on opposite sides of campus with numerous arts related buildings located between these two hubs. The Schaefer Center is App State’s state-of-the-art 1660 seat venue and is home to a multitude of campus and community events, as well as visiting artists from across the region, nation and the globe.

Valborg Theatre is home to the University Theatre Mainstage; Chapell Wilson Hall houses the Department of Theatre and Dance; Wey Hall contains the Department of Art; and the Broyhill Music Center houses the Hayes School of Music. The Turchin Center for the Visual Arts features six dynamic galleries with changing exhibitions of contemporary art works by national and international artists, as well as the finest local artists of the region.

The campus arts corridor builds on more than three decades of outdoor sculpture programming at the university, and strongly supports the efforts by the Town of Boone and surrounding communities to feature outdoor artwork in public spaces. The corridor will play an important role in positioning both campus and community as a vibrant and dynamic arts and cultural destination attracting visitors to campus and engaging them in the multi-faceted life of the university. The corridor will support the university’s teaching mission by serving as an outdoor classroom for students of all ages, as well as the public, and enhancing learning opportunities through the visual arts.

Situated on King Street at the crossroads of Appalachian State University and downtown Boone, the Turchin Center anchors the arts corridor and serves as a crossroads between campus and community and provides a link to the public art initiatives of the town. The iconic Transit Candy stair mural located on the grand staircase adjacent to the main entrance of the Turchin Center serves as the starting point for the corridor. Painted in the summer of 2020 by Baltimore artists Jessie Underhalter and Katey Truhn, the mural takes its cues from regional textiles. The vibrant, geometric design runs from the top of the 36-step grand staircase, flows to the bottom of the steps and terminates with a fringed edge as might be found on a rug.

The sculptors represented in the arts corridor all reside in North Carolina and what unites their work is that the pieces embrace re-emergence and transformation as a result of the pandemic; social unity, connection and community building; or hopes and dreams for a more equitable world.

Adjacent to the stair mural and next to the entrance to the Turchin Center lecture hall, Beau Lyday’s Will the Circle be Unbroken consists of two beautiful wood benches connected by overhead circles that embrace the benches and form a moon gate. The circle is a universal symbol utilized by most religions and cultures and is symbolic of vitality, wholeness, completion and perfection — a symbol of infinity, having no beginning, no ending. This beautifully patinaed intimate seating area invites one to rest, reflect and connect.

After forty years in the furniture business, Lyday left to pursue sculpting in metal and wood. He believes that being an artist is something that one is born to do and does not necessarily require a formal art degree. His major influences are Gothic and mid-eastern architecture, Celtic symbols and sacred geometry.

The sculpture crafted by Mike Roig, consists of an undulating stainless steel main section topped by a cast iron winged female figure who is emerging from a chrysalis that protects and embraces her, just as a chrysalis protects an emerging butterfly. It symbolizes her re-emergence and transformation which is enhanced by the kinetic aspect of the sculpture which pirouettes smoothly on its axis. The sculpture is aptly named Chrysalis.

Roig has been fabricating sculpture for over thirty-five years and in his Carrboro, NC studio for more than twenty. A graduate of the fine arts program at the University of Maryland, he has become best known for his kinetic sculpture. His work can be found in public and private collections nation-wide with the highest concentration being here in the mid-Atlantic region.

The sculpture Sounds of the Elements by Hanna Jubran from Grimesland, NC is a striking stainless steel, bronze and aluminum sculpture which visually leads people into campus. The work is part of a series of sculptures that reflect the four elements, Earth, Water, Fire and Wind in our universe on the micro to the macro level. Representative of wind, Sounds of the Elements creates delicate chimes when activated by the wind.

Jubran received his M.F.A. in Sculpture from the University of Wisconsin-Milwaukee and is currently a Sculpture Professor at East Carolina University in Greenville, North Carolina. His work addresses the concepts of time, movement, balance and space. Each sculpture occupies and creates its own reality influenced by its immediate surroundings.

The vibrant colors of the painted steel structure of Carl Billingsley’s Double Wedge creates an eye-popping sculpture that is an interplay of simple geometric shapes. At first glance, the halves seem separate and precariously balanced, but in fact are quite sturdy due to a supportive connection between the two halves and are symbolic of the need to strike a balance in our cultural relationships.

While living in Germany as a child, Billingsley discovered the world of museums, cities, cathedrals, monuments and sculpture. Billingsley began as a wood shop technician at the School of Architecture and Urban Planning at the University of Wisconsin-Milwaukee and later in his career, he was a professor and coordinator of the sculpture program at the School of Art and Design at East Carolina University, in North Carolina. Billingsley believes that strong work will be recognized regardless of place and culture and that artists should be able to communicate with their work even though they don’t share language, culture, time and place with their audience.

Nestled against the library building, the sculpture of Jonathan Pellitteri, Balancing at New Heights, is petite in stature but large in concept. The two tapering concrete staircases are punctuated with empty chairs on the top tread and act as a cue for viewers to project themselves into the work. The sculpture is an allegory for two people seeking achievement while following different life paths. The position of the chairs facing each other emphasizes the need for dialogue among those who are on opposing paths, which in times of heated community and national tensions, is more important than ever.

Pellitteri is based in Charlotte, North Carolina.  His studio practice focuses on sculptural objects that combine an appreciation for craft with a curiosity for materials and a desire to tell stories.  His artwork has been shown in numerous museums and galleries throughout the United States and parts of Europe, and is included in many public, private and corporate collections.

Set in an open lawn area is Jessica Bradsher’s sculpture, Pegasus Landing. This winged horse, made of tubular steel, is light and airy and feels like it may have just flown down from the surrounding mountain tops. Created when the artist was producing her thesis on the topic of empathy, she believes that outdoor sculpture work is an integral part of the re-emergence and transformation of our country and world.

Bradsher is a visual artist specializing in metal sculpture and painting who is living and working in Greenville, NC. She creates with themes ranging from whimsical to contemplative in her outdoor sculptural pieces. In her most recent series, she is exploring the idea of encouraging the practice of empathy in our society. Bradsher earned her MFA in 2018 at East Carolina University and currently teaches visual arts at John Paul II Catholic High school in Greenville. She believes it is important to be an example to her students of a productive, working, successful artist to show the next generation the possibilities found within the arts.

Kevin Vanek’s vibrant sculpture, LOUD! is meant to be a fun attention grabber while also being a literal mouthpiece for unheard voices, including the LGBTQIA+ community, Black and Brown folks, fems in male dominated spaces, poor people, disabled individuals, young, old, and any other disenfranchised or marginalized voice. The artist believes that through their art, they can give voice to those who are often unheard in the art world.

Vanek is a dedicated foundryman and artist, striving to combine contemporary concepts with traditional techniques. Through the hard work and meticulous problem solving needed in metal art, they craft one-of-a-kind reliquaries. Vanek is able to work intuitively to create physical objects that function as stand ins for their own struggles such as mental health issues, class/race/gender equality, the plight of the labor class, humanity’s over burdening of the world and other complicated societal issues. Vanek is the Foundry Director and Faculty member at the University of North Carolina Greensboro. They received a BFA from Bowling Green State University in 2010 and an MFA from East Carolina University in 2013.

These seven sculptures will be on campus for two years. For more information, visitors are invited to scan the QR code on the signage next to each sculpture, visit: tcva.org or stop by the Turchin Center for a sculpture guide. 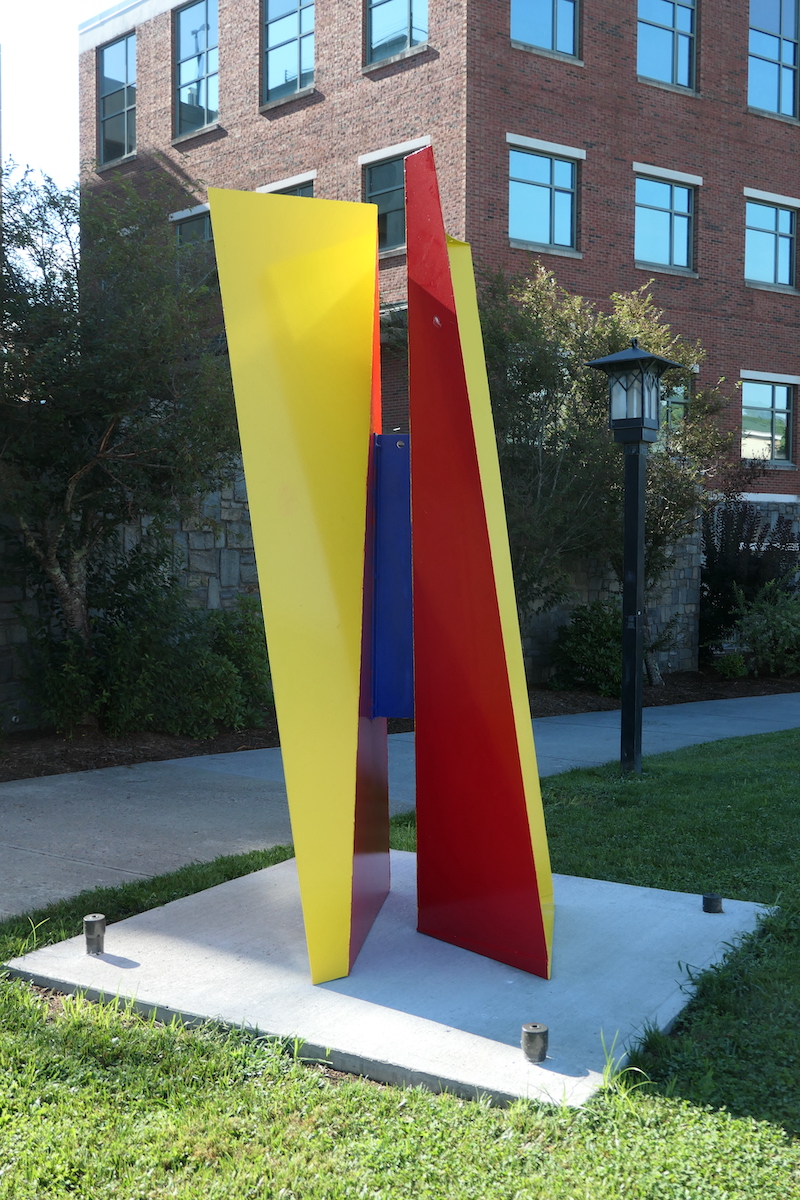 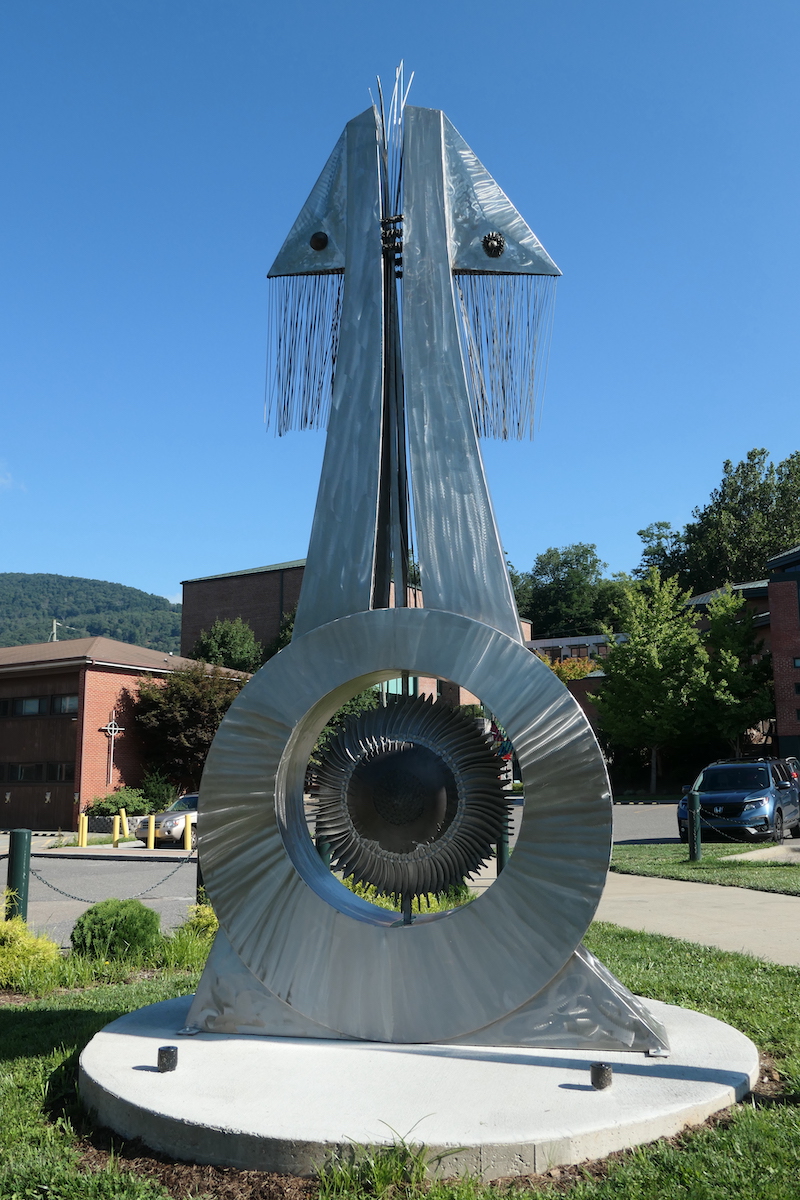 Hanna Jubran, Sounds of the Elements 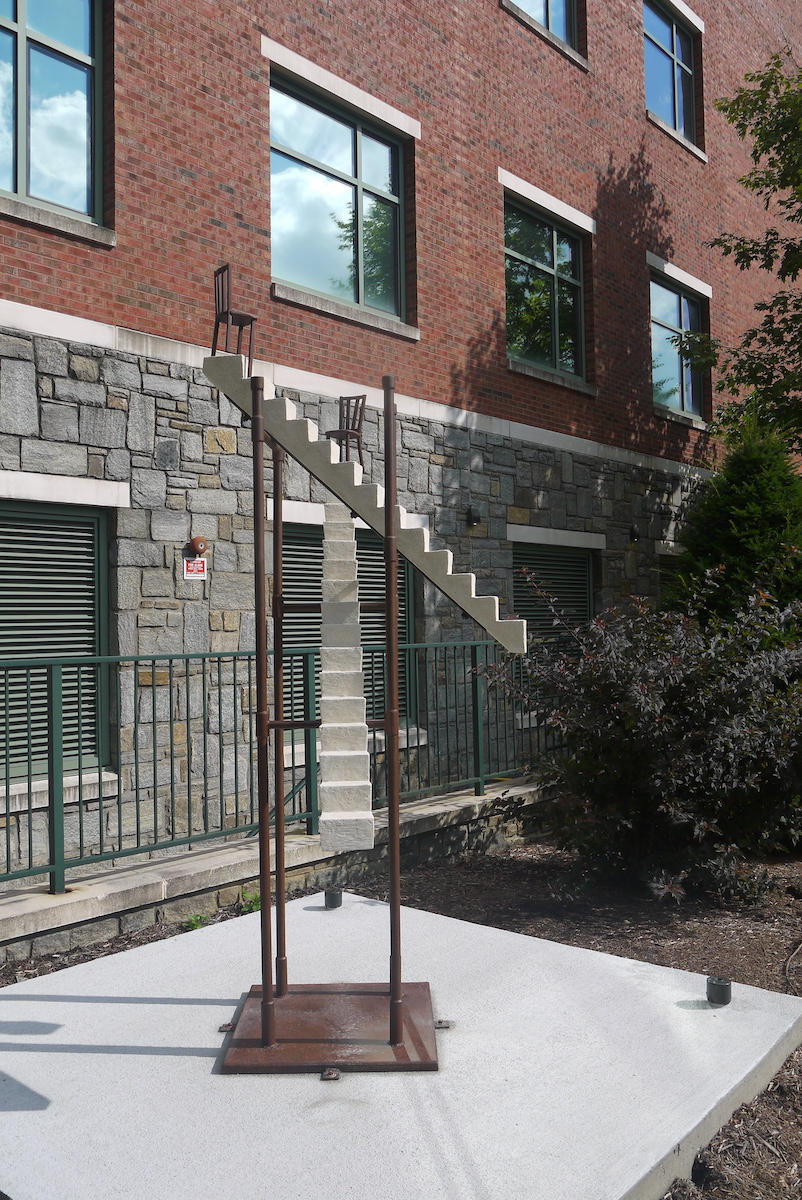 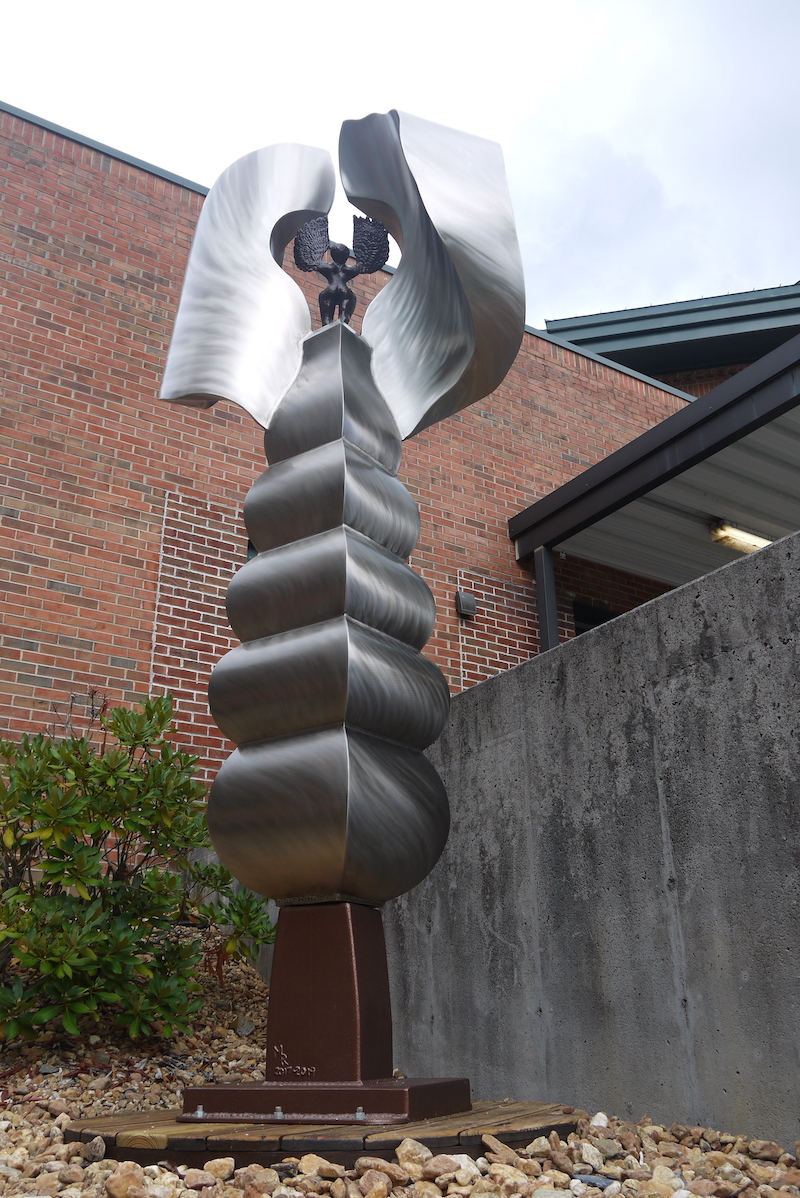 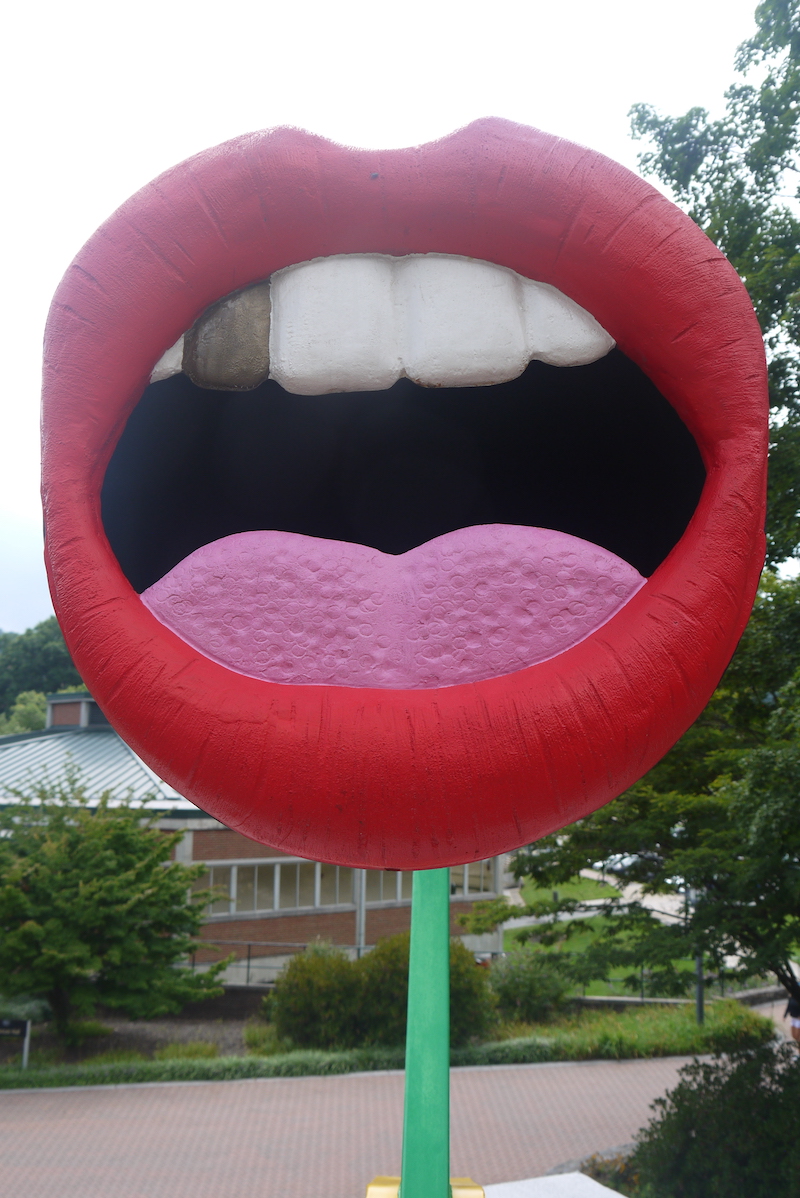 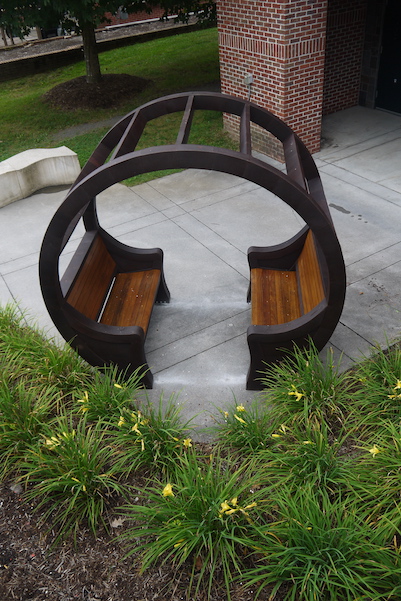 Beau Lyday, Will the Circle be Unbroken 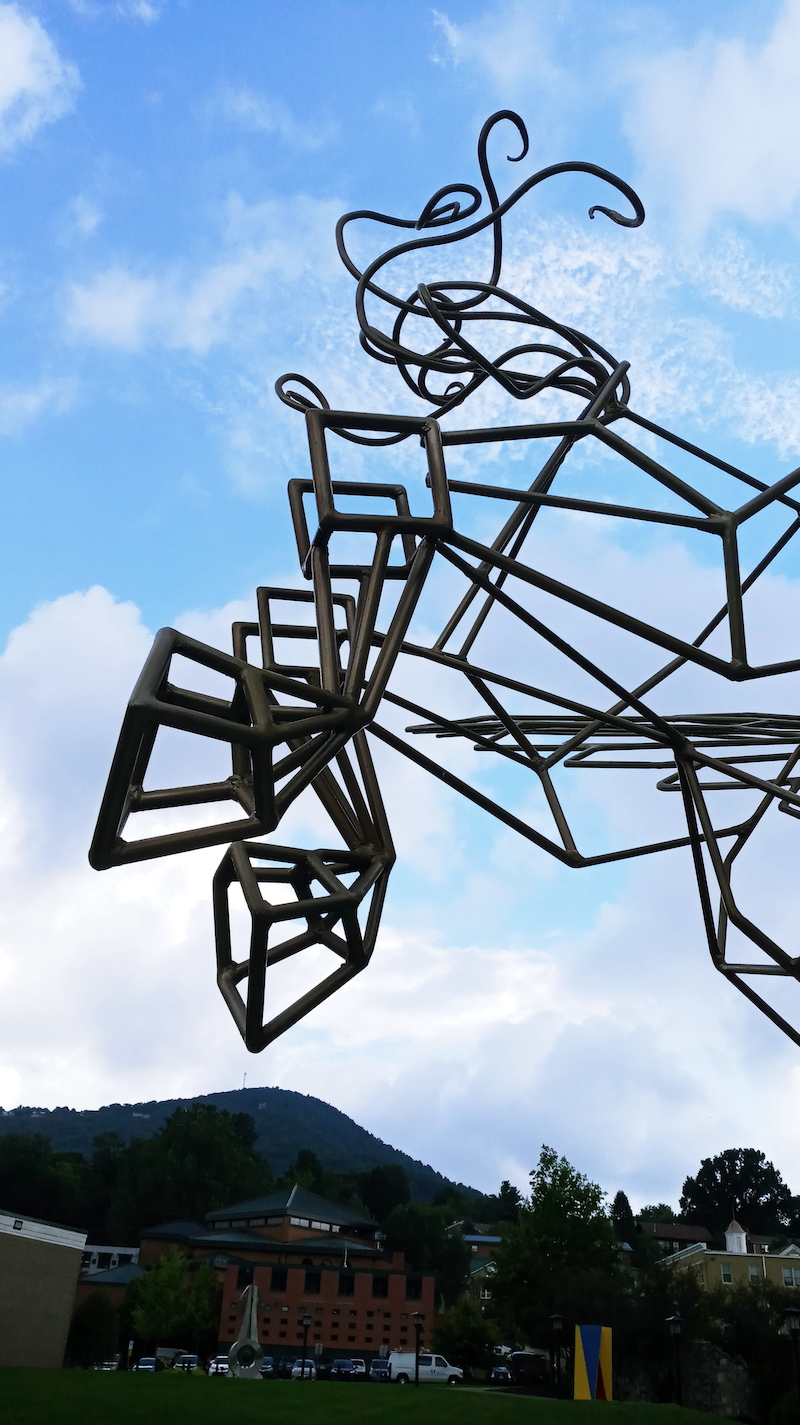