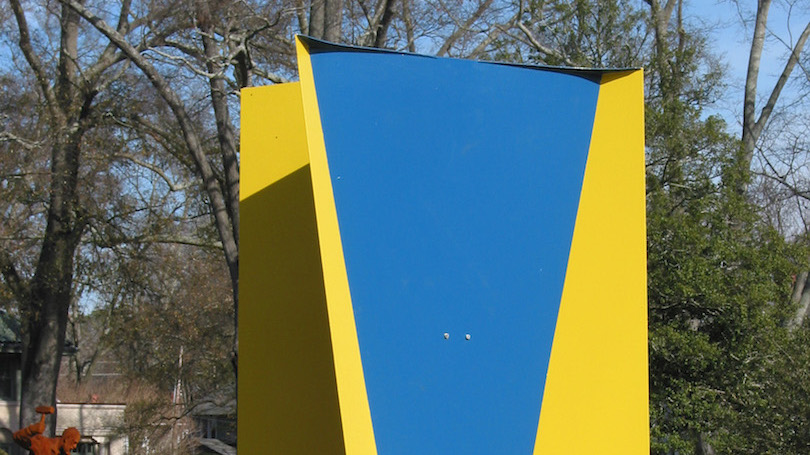 Double Wedge involves the interplay of simple geometric shapes and the dynamic of primary colors. The reversal of the wedge shape in the composition creates uncertainty about the balance of the sculpture when seen from certain angles, but the sculpture is very stable and safe. Balance is achieved by the supportive connection between the two elements. Perhaps we should strive for the same type of balance in our cultural relations.

Carl Billingsley was born in Oklahoma and spent his formative years in a variety of locations as his father, a sergeant in the field artillery, was transferred from post to post. When he was about nine years old his family moved to Germany and during the three years they were there, Billingsley discovered the world of museums, cities, cathedrals and monuments. It was there that he first encountered sculpture and was amazed and awed by what he saw.

Billingsley joined the University of Wisconsin-Milwaukee as a wood shop technician at the School of Architecture and Urban Planning. Later in his career, he was a professor and coordinator of the sculpture program at the School of Art and Design at East Carolina University, in North Carolina. In 2014 he retired from teaching to devote his time to studio work, symposia and exhibitions.

Billingsley believes that strong work will be recognized regardless of place and culture and that artists should be able to communicate with their work even though they don’t share language, culture, time and place with their audience. This idea was substantiated with awards for his sculptures in competitive exhibitions in Japan, China and Australia. He won the semi-grand prize at “Toya Mura International Sculpture Biennale”, Toya Mura, Japan and his sculpture took a top prize in the “1st Guilin Yuzi Paradise International Sculpture Awards” Guilin, China. He won the Andrea Stretton Memorial Invitational Award at Sculpture by the Sea-Bondi in Sydney, Australia for his installation “Red Centre” which led to an invitation and funding to exhibit in Sculpture by the Sea-Cottesloe in Perth, Australia. He traveled to Latvia where he was in charge of casting large-scale iron sculptures for a symposium at Pedvale Open Air Museum & Sculpture Park, after which he assisted with the International Conference on Contemporary Cast Iron Art which took place for the first time in Europe at Pedvale.

Billingsley’s work can be found in collections and sculpture parks from North Carolina to Wisconsin. He has permanent public sculpture in Norway, Israel, Estonia, Japan, China and Brazil.