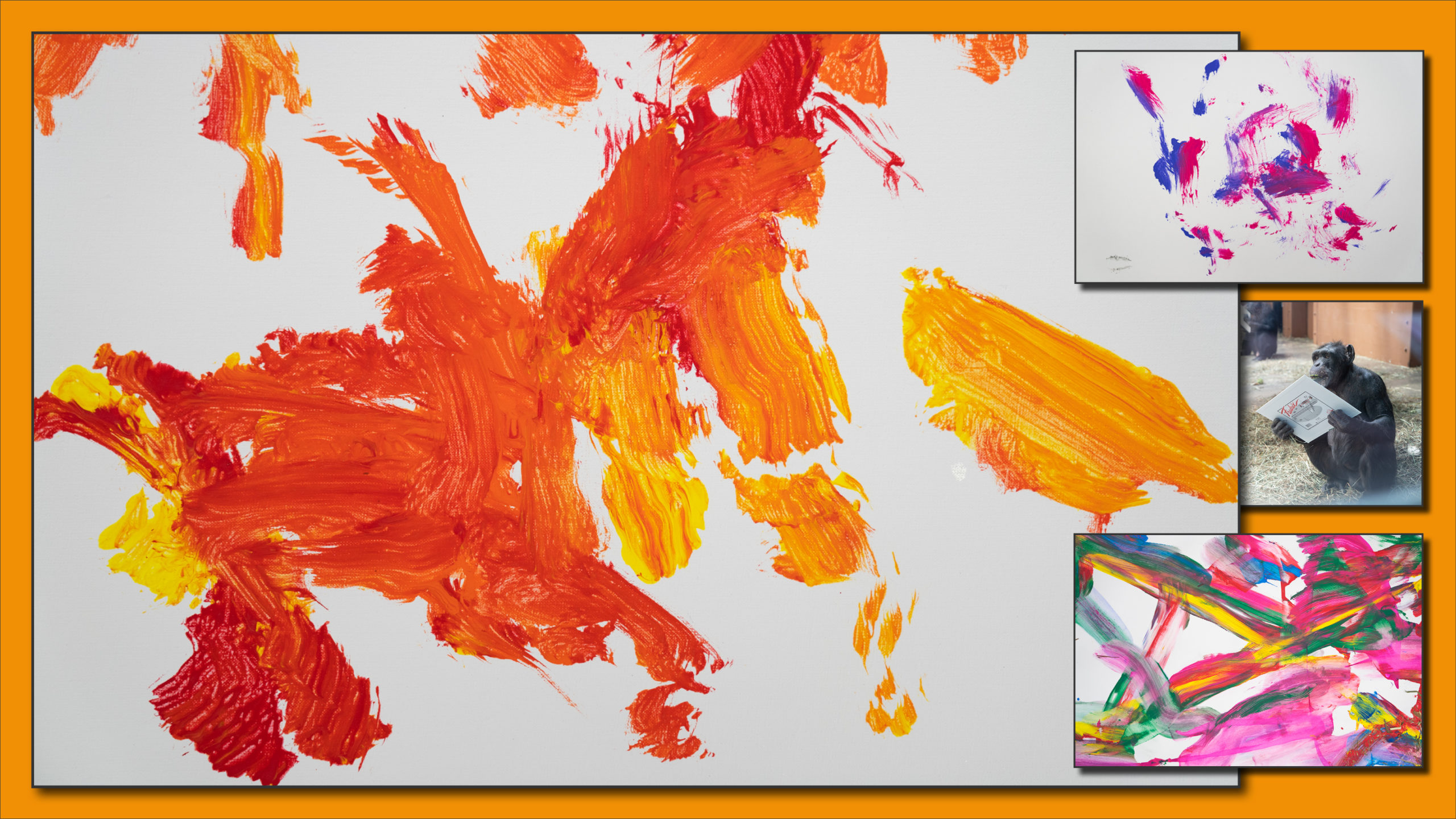 Humans and chimpanzees share 98.6% of the same DNA. Both species have forward-facing eyes, opposing thumbs that accompany grasping fingers, and the ability to walk upright. Far greater than just the physical similarities, both species have large brains capable of exhibiting great intelligence as well as an incredible emotional range. Chimpanzees form tight social bonds, especially between mothers and children, create tools to assist with eating and express joy by hugging and kissing one another.

Over 1,000,000 chimpanzees roamed the tropical rain forests of Africa just a century ago. Now listed as endangered, less than 300,000 exist in the wild because of poaching, the illegal pet trade and habitat loss due to human encroachment. Often, chimpanzees are killed, leaving orphans that are traded and sold around the world.

Thanks to accredited zoos and sanctuaries across the globe, strong conservation efforts and programs exist to protect and manage populations of many species of the animal kingdom, including the great apes – the chimpanzee, gorilla, orangutan and bonobo. Included in the daily programs for many species is what’s commonly known as “enrichment”––  an activity created and employed to stimulate and pose a challenge, such as hiding food and treats throughout an enclosure that requires a search for food, sometimes with a problem-solving component. 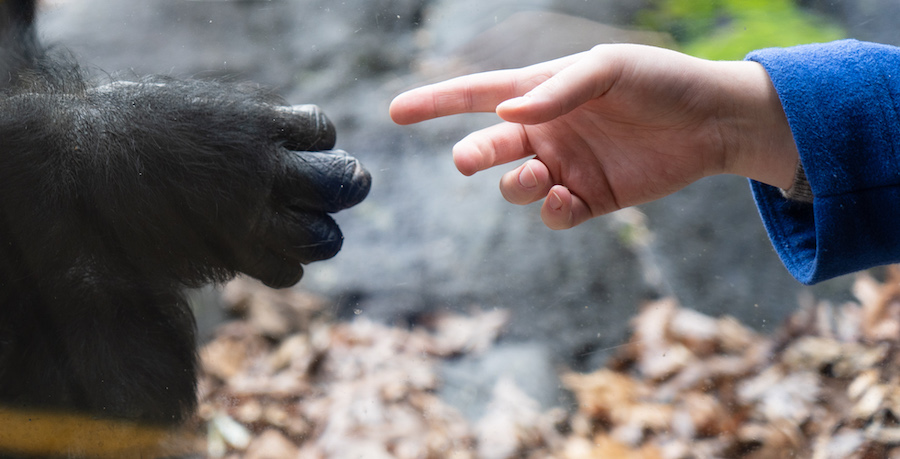 With a constantly changing, growing and evolving relationship between humans and the earth, and one another, our similarities–– and at times a creative commonality––  remain our foundation, a gravitational force that pulls us together, an enduring and unbreakable bond.

In the case of chimpanzees and other great apes, research has shown that certain individuals respond to color and enjoy painting as a type of enrichment. Like human artists, each chimpanzee has a unique reaction and approach to their canvas. While most chimpanzees enjoy using their hands and feet, occasionally even their lips, some have even learned how to use a paintbrush. 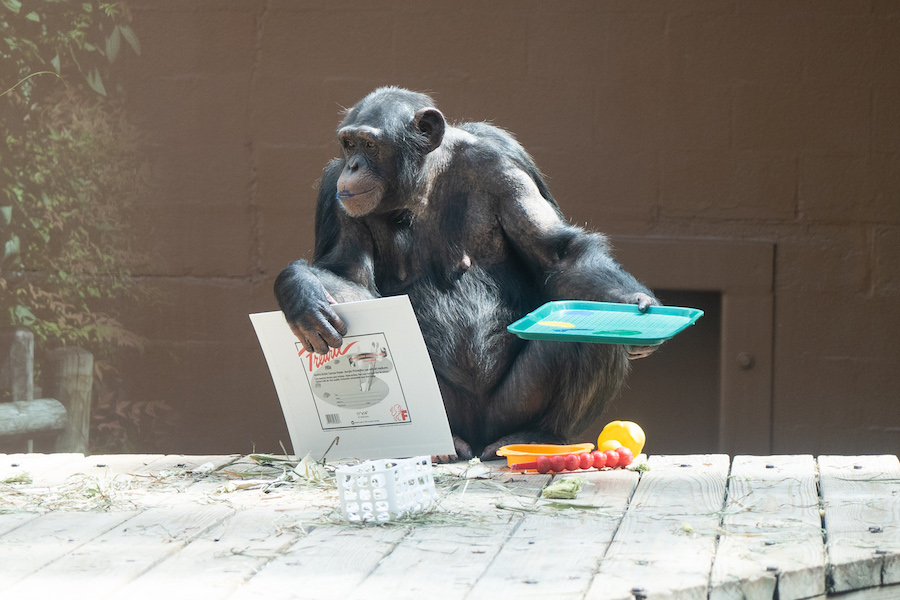 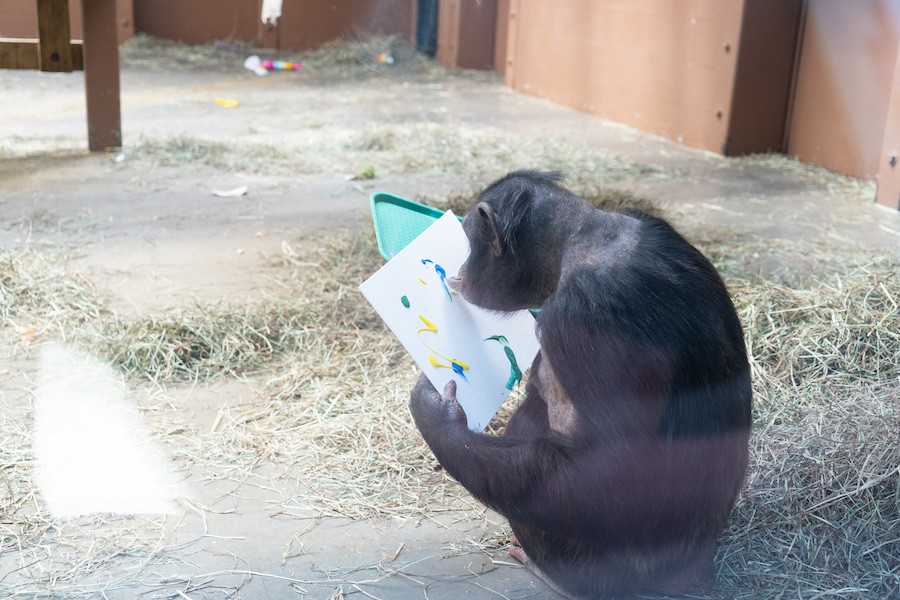 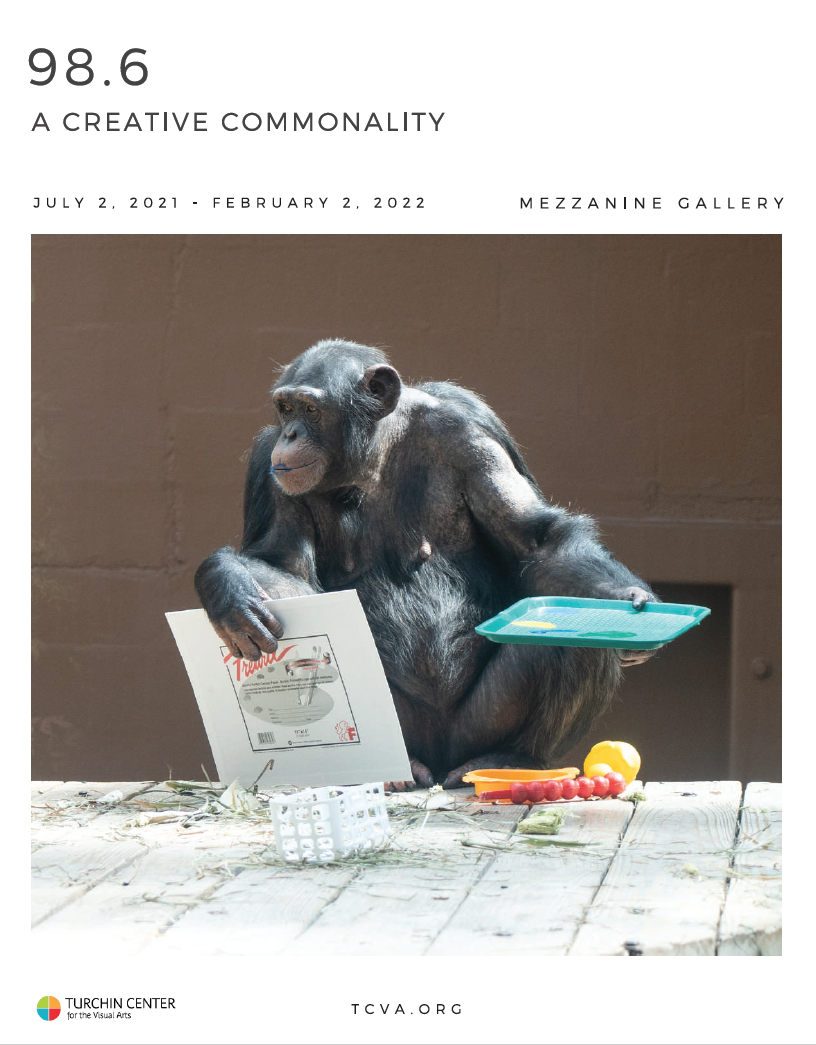 This exhibition features works created by chimpanzees at Zoo Knoxville, an AZA-accredited institution in Knoxville, Tennessee that works closely with the SSP. Their eight chimpanzees, who happily roam in a very large enclosure, are offered a painting enrichment as often as their committed caretakers can provide. Also included in this exhibition are works created by chimpanzees from The Center for Great Apes, a secluded sanctuary in Wauchula, Florida that rescues chimpanzees and orangutans from the entertainment industry. The CGA provides a positive, safe and stress-free environment for almost sixty (and growing) individuals.

Reflecting on the concept of 98.6%, our shared DNA, and the vast number of similarities between humans and chimpanzees, we celebrate our likeness. At the same time, we ponder  questions as we explore our creative commonality: Are we really so different? (In fact, the comparison of DNA between chimpanzees and humans is higher than that of chimpanzees and gorillas). How much DNA do we share with other creatures?  Is the creative drive, once thought to be the sole domain of humans, found across the animal world? And what other mysteries about the links between humans and animals remain unsolved?