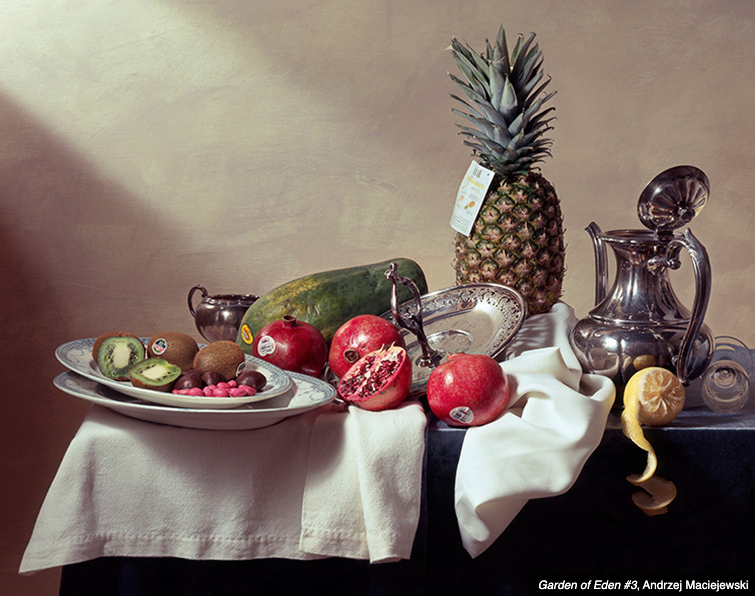 “Our society created naïve approach to the nature, glorifying its fertility and opulence. In same time our civilization harnessed and enslaved it. From the paintings of old masters to modern commercials, we still get the same picture of “natural”, healthy and beautiful fruits and vegetables, but the truth is that we are slowly destroying whatever is left of nature on our planet for the sake of money and comfort. The fruits and vegetables in the supermarkets, numbered and labeled, certified and standardized, are very good example. The 21st century society has created new Garden of Eden, where everything looks perfect and flawless. But many things, like the taste, the singularity and often even the humanity, have been lost during this process. My intention was to inspire a discussion on our relationship with the nature and on our civilization.”

Andrzej Maciejewski was born in 1959 in Poland. He studied at Warsaw College of Photography (Poland), Polish Society of Art Photographers School (Poland) and College of Photographic Arts in Ostrava (Czechoslovakia). In 1985 he immigrated to Canada. He worked as a commercial photographer in Toronto until mid-1990’s. Then he moved to the countryside in Eastern Ontario and switched entirely to art. He published 4 books: Bread (1996), Toronto Parks (1997) After Notman (2003) and Garden of Eden (2012). After Notman was a bestseller in Canada and has been widely discussed internationally. Andrzej Maciejewski exhibited in Canada, USA, Poland, UK, Germany, Norway, Latvia, Finland and Uganda. At this moment three of his series: Garden of Eden , Weather Report and VIP Portrait Gallery, are on world tour, visiting several venues in Europe and North America. His works may be found in many private and public collections, including National Gallery of Canada.