In her site-specific installation for the center’s Mayer Gallery, the artist employs a design that incorporates a minimum of images appropriated from print media and art history to encourage viewers to look more critically at our society. The Turchin Center is committed to increasing opportunities for artists to create new work, and we are excited to present the work of this significant regional artist.

Trained in a traditional art setting at Hollins College in the 1950s, the artist spent the next three decades observing the evolving world of American art. She found influence in the color and pattern painting of the ’60s, the minimalist movement of the ’70s, and in the ’80s she made a return to realism in painting. Along the way, the artist earned an MFA at the University of North Carolina at Greensboro, and sought opportunities to study with important American painters.

Change is the chief constant in my art. My artistic training in the 1950s at Hollins College was traditional, and included any courses in art history. Study at the Skowhegan (Maine) School of Painting and Sculpture, with Hans Hofmann in Princetown, Massachusetts, and for the MFA degree at the University of North Carolina at Greensboro widened my horizons. I observed directions in the art world, from the abstract expressionists onward, and played with many of those ideas. In the ’60s, I studied the interaction of color and patterns. The ’70s brought minimalism to my printmaking and dozens of studies for a large mural commission. In the ’80s I returned to painterly realism.

In about 1993, I became fascinated with photographs and ads in popular magazines such as Interview, W, Vanity Fair, and Harper’s Bazaar. Contemporary advertising speaks volumes about our society. I use appropriated images and modern reproduction technology to exaggerate the silliness, humor, pathos, and/or irony of these images. To make sense of the visual clutter with which the world bombards us, I often combine these with images from art history. In the process, I discover that human nature changes little over the ages.

My recent work deals with the feelings evoked by the events of September 11 and the wars in Afghanistan and Iraq. On the night of 9/11, I dreamed of the skyline of New York. The Twin Towers were replaced with two Islamic prayer towers. Soon afterwards I began making collages using images of the attack and its aftermath. Photographs of explosions, firemen, the faces of witnesses and the dead, twisted steel, flying bodies, Afghan fighters, tanks, veiled women, American soldiers: these are the inspiration for collages and, in turn, the large mural installations. To be most effective a minimum of images are arranged strategically. I hope to convey the emptiness we feel and to help us look more critically at our own society. 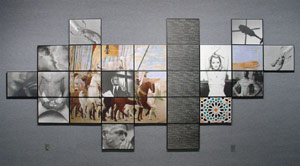 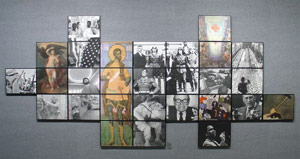