Beyond the Image: The Paintings of Warren Dennis

The human figure has been a central subject within the paintings of Warren Dennis. This exhibition Beyond the Image features Warren’s playful and serene imagery in a survey of his most recent work along with selected works from past years.  The mood of the paintings attracts the viewer to investigate the complex line and emotion that the artist has invested within each work of art.  Special thanks goes to the artist and Toni Carlton at the Toni Carlton Gallery for their efforts in helping to realize this exhibition. 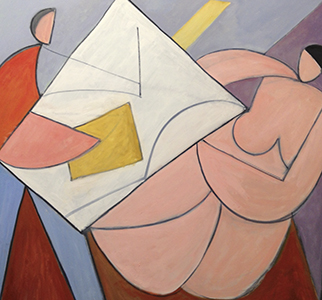 Image courtesy of the artist and Carlton Gallery. ©Warren Dennis

The human image is obviously the central factor in my work. These figures and faces result from years of effort – a careful honing, by trial and error, to gain a specific effect. By now, these people are all mine. They confront each other, they stand alone in contemplation or amazement, or they are sometimes simply asleep. My concerns are with showing dignity and humor and innocence as they affect us, and with the robust, absurd gestures we make to reveal ourselves. With our backs to each other or face-to-face, we show and try to hide our feelings.

I would like for these paintings to go beyond the image, to involve the viewer in a pure way. Even though the figures are distorted, I hope that they confront the public as if they were real people. This sense of dramatic presence is what I always work toward.

Warren has been teaching art since 1955. His first position was at Judson College in Marion, Alabama. He then switched to Appalachian State University in Boone, North Carolina, until he retired from teaching in 1993. He was the Chairperson for Appalachian State’s Department of Art from 1980 to 1984.

A respected artist of long standing, Warren’s many exhibitions, solo and group shows, prizes and awards would make a listing of many pages. His work is represented in many corporate and private collections, including the Hickory Museum of Art’s permanent collection. His paintings have been featured on Charles Kuralt’s Sunday Morning TV program, as well as in Southern Living Magazine. Warren continues to live and work in Boone, NC.