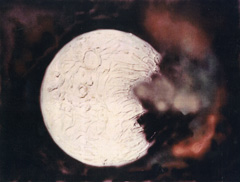 Internationally known artist Doris Dillon presents a solo exhibition of paintings entitled Outer Space and Inner Man. This phrase was coined by the artist at her first exhibit on the subject in Denver, CO after the first Moon Walk in 1969, and was the result of a commission by Dr. Jacques Yost (then Director of Research Marathon Oil). Dillon’s work captures a dimension that intends to pull the viewer into the picture and embed it indelibly into one’s consciousness. This exhibit is an array of haunting, majestic images that symbolize the forces of the cosmos, and involve the spectator with the ethereal atmosphere that emerges from Dillon’s imagination. This exhibit is sponsored by the American Biographical Institute of Raleigh, one of the major leading authorities on the biographies of distinguished individuals worldwide.

Dillon has exhibited internationally in Dublin, Ireland; in Cambridge, England; at St. John’s College, Lisbon, Portugal; and in Vancouver, BC, Canada; with a Honolulu Hawaii exhibit scheduled for June 2005. Nationally she was represented and had solo shows at the Nelson Rockefeller Collection in New York; the Veerhoff Gallery in Washington, DC; and the Amparo Gallery of Denver, CO, and Scottsdale, AZ. Other shows of note were at the Cadme Gallery, Philadelphia, PA; and Highlands Gallery in Atlanta, Georgia. She was an invited artist for the Aerospace Century XXI exhibit at the Astronomical Observatory at the University of Colorado in Boulder, CO. Other Museum exhibits include The Denver Art Museum; Heard Museum in McKinney, TX; Colorado Gallery of the Arts/Museum in Littleton, CO; and most recently the Colburn Earth/Science Museum in Asheville, NC.

Her paintings are included in prominent public and private collections as well as museums. Being founding curator for the Van Vechten – Lineberry Museum in Taos, New Mexico, she also founded the Department of Fine Art at Regis College (now a University) in Denver, CO, and, while chairperson there, she developed a series of seminars on the “Inter-Relationship Between the Fine Arts and Science”. Listings include Marquis “Who’s Who in the World”, “Who’s Who in America” and The Dedication Page for the “World’s Who’s Who of Women”. Janet Evans, president of the American Biographical Institure, says that “Doris Dillon is a leading personality in our International Sphere. As a member of the International Culture Council she takes part in the mutual sharing of ideals and values. It has had a long and enviable history of promoting peace and understanding to the international community. All are dedicated to furthering these principles for the overall and far-reaching benefit of Society as a whole.”

Elected representative for the Colorado Council on the Arts and Humanities, she also served on an Advisory Panel. Appointed Deputy Director General for the IBC in Cambridge, England, she also holds a permanent position of Consular Representative for the International Cultural Council. An associate member of The National Museum of Women in the Arts in Washington, DC, she has also served on many boards including the Denver Art Museum.

Other honors and awards have been presented these include “Best of Show” International Platform Association and first place drawing Rocky Mountain Conference Center Estes Park, CO. She was honored with the “Excellence in the Arts” Award, the AAUW Salute to Women Award, and “Greatest Minds of the 21st Century”. In Dublin, Ireland, at the 30th Congress on Science, Culture, and the Arts in the 21st Century for 2004, Dillon received the Congress Medallion for distinctive participation. Recipient of the “Outstanding Speakers of the 21st Century” award by the IBC of Cambridge, England, Dillon was also chosen “International Visual Artist of the Year 2004” in Vancouver, BC, Canada.