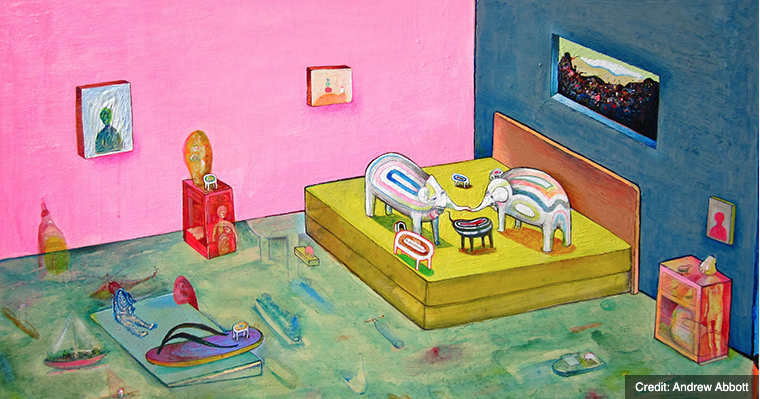 Brother and sister Andrew Abbott and Paige Willow grew up in the countryside of Boone, NC. Inspired by the land, people and places of the High Country, both went on to pursue art degrees at separate universities in the UNC system. Their paths have brought them together once again in this hometown art show. This is not just an exhibition but also a reunion with old friends, family and the landscape that inspired their love and dedication to the arts.

Born in Nova Scotia in 1979, Andrew Abbott’s family moved to Boone, North Carolina soon after. During his childhood, he also lived in Jamaica and Nigeria for short periods of time. He holds a bachelors degree in Studio Art from both the University of North Carolina at Charlotte and Wilmington. After finishing college, he moved around the country before joining the Army as a medic in 2004. This is where he honed his artistic style with small format paintings on paper. In 2007, he left the Army and lived in San Juan, Puerto Rico where he painted and spent time on the beach. His work has been exhibited in Philadelphia, Oakland, California and Portland, Maine. Andrew Abbott currently lives and works in Maine and is represented by the Robert Fontaine Gallery. Abbott is represented by the Moberg Gallery and Garner Narrative.

Paige Willow was raised in Boone, North Carolina. The mountains became her inspiration and helped her imagination run wild. Upon graduating from Watauga High School, Paige went on to the University of North Carolina at Chapel Hill where she received a BFA in Painting. She now lives in Charlotte, North Carolina and has exhibited works at Loft 1523, Madisons, Dharma Lounge, Apostrophe Lounge and TILT.