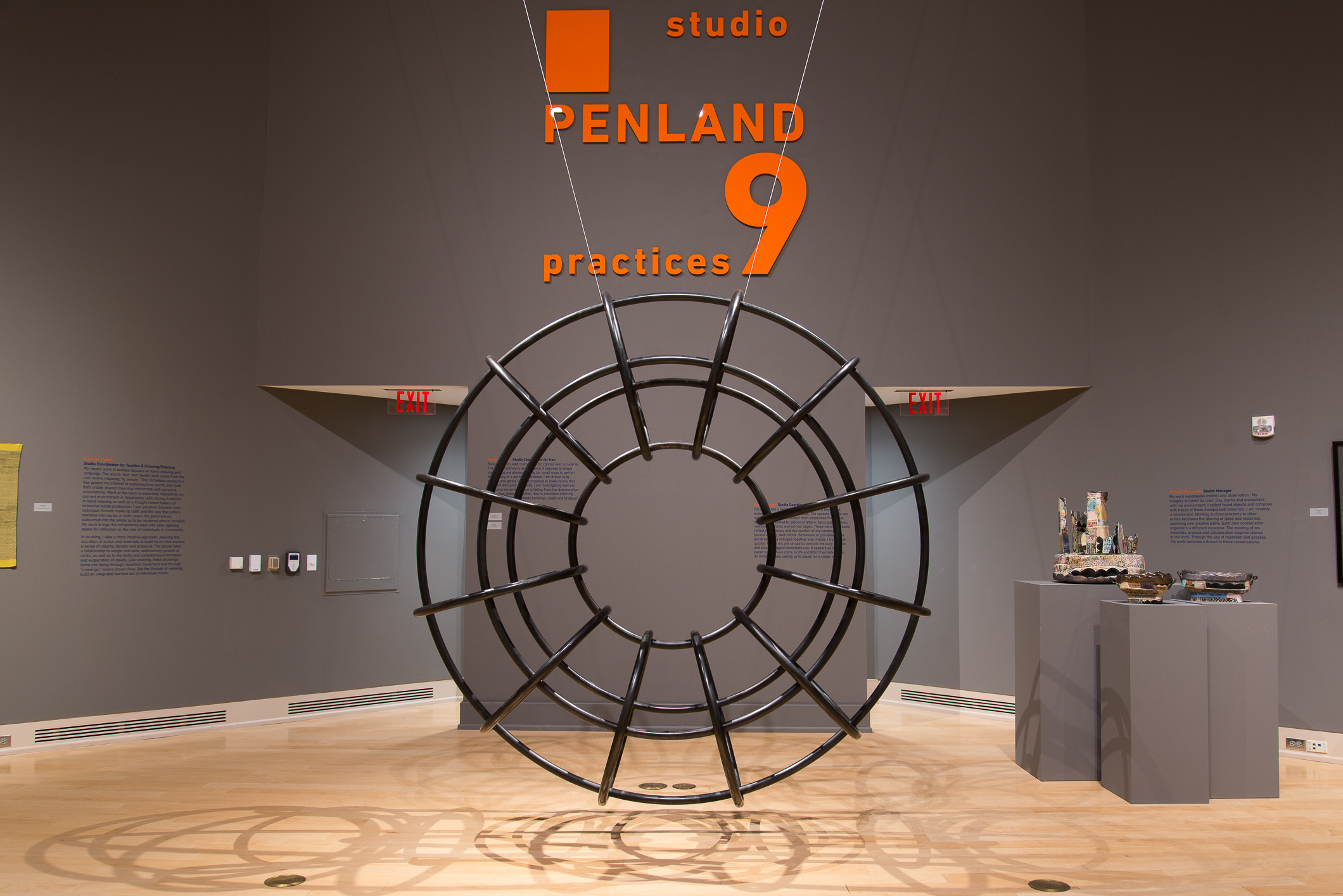 So often the hardworking artists who coordinate studio practices at any institution are, truly, “behind the scenes.” Studio Practices: Penland 9 brings the nine talented Penland Studio Coordinators out of the studio shadows and into the bright lights of the Turchin Center’s Main Gallery. Working together to support the practices of other artists at Penland has given the talented coordinators a remarkable synergy; their artwork is individually strong and compatible with one another – creating a dynamic and moving installation. 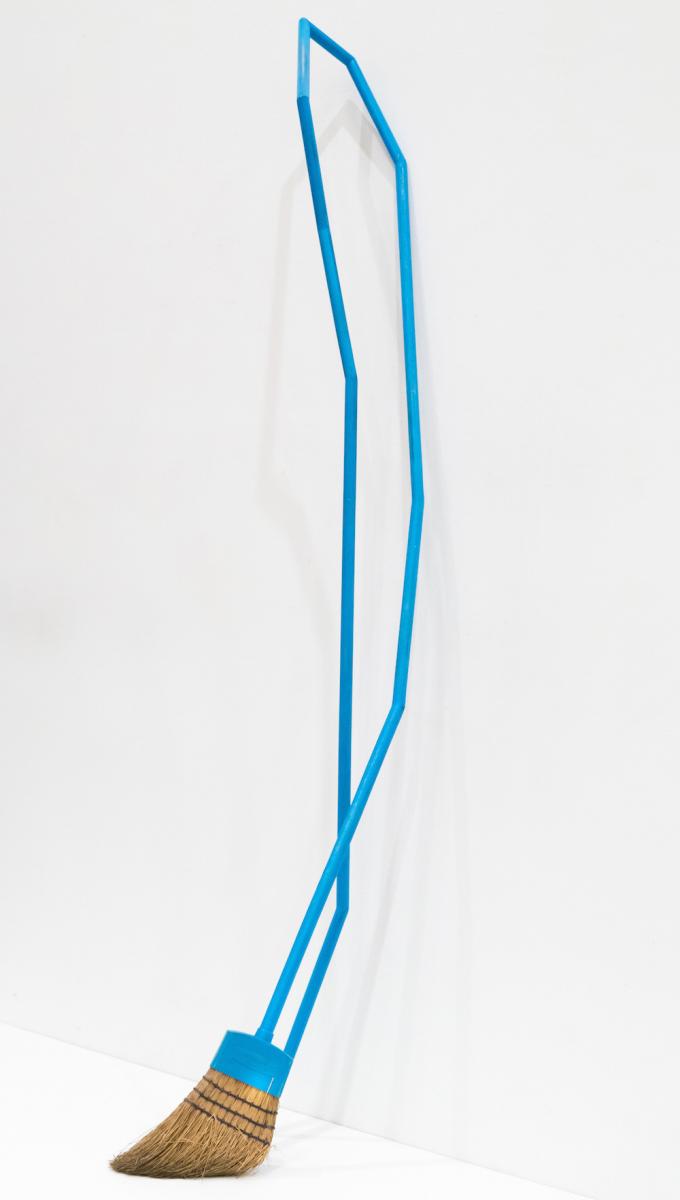 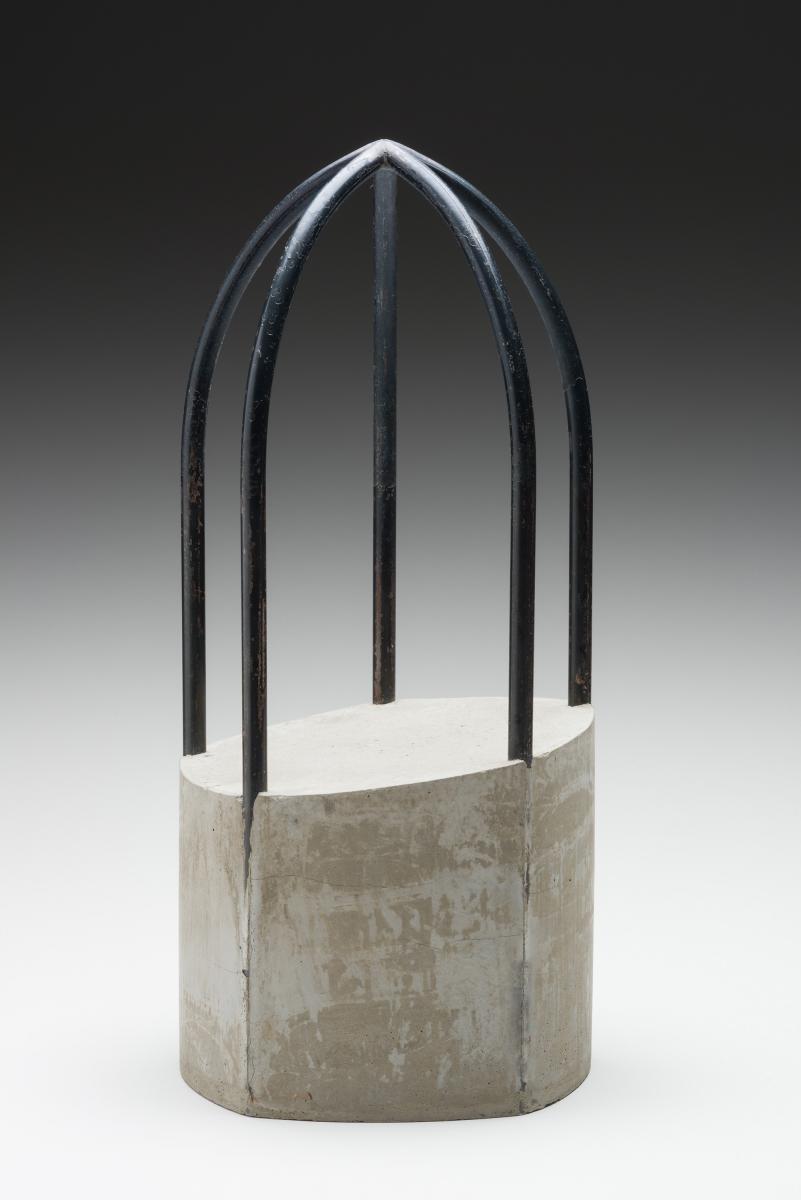 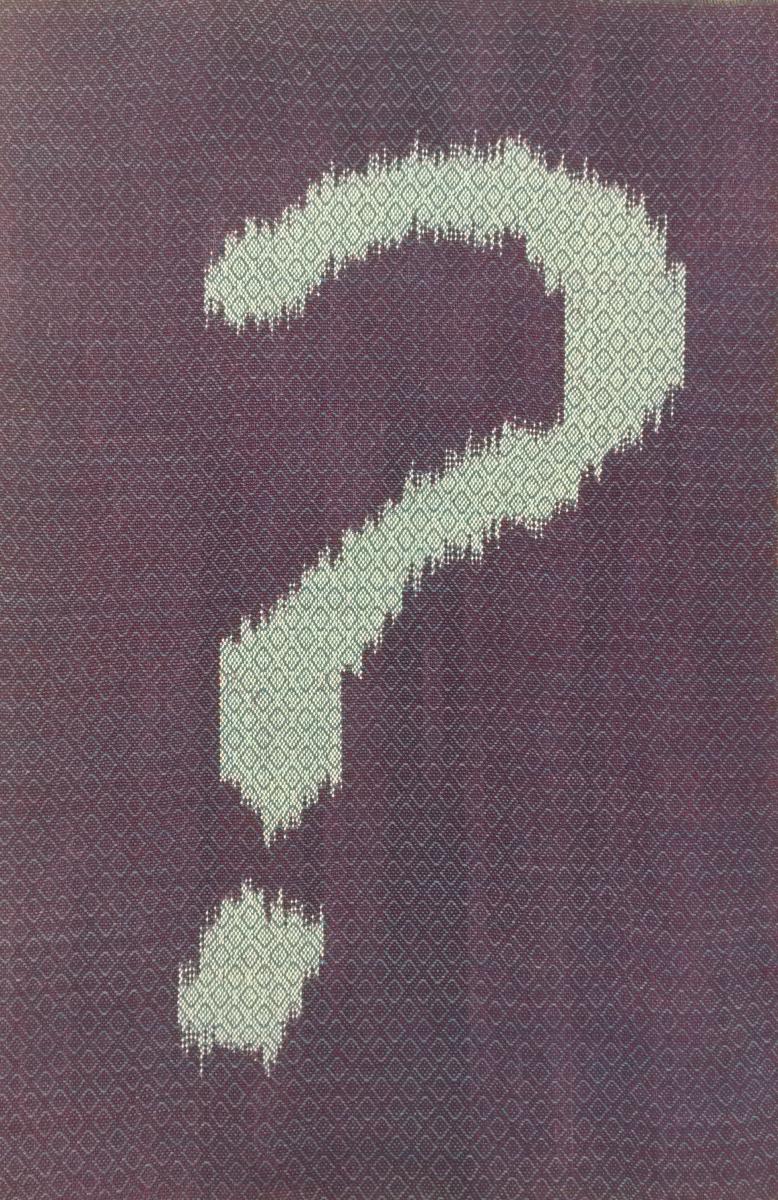 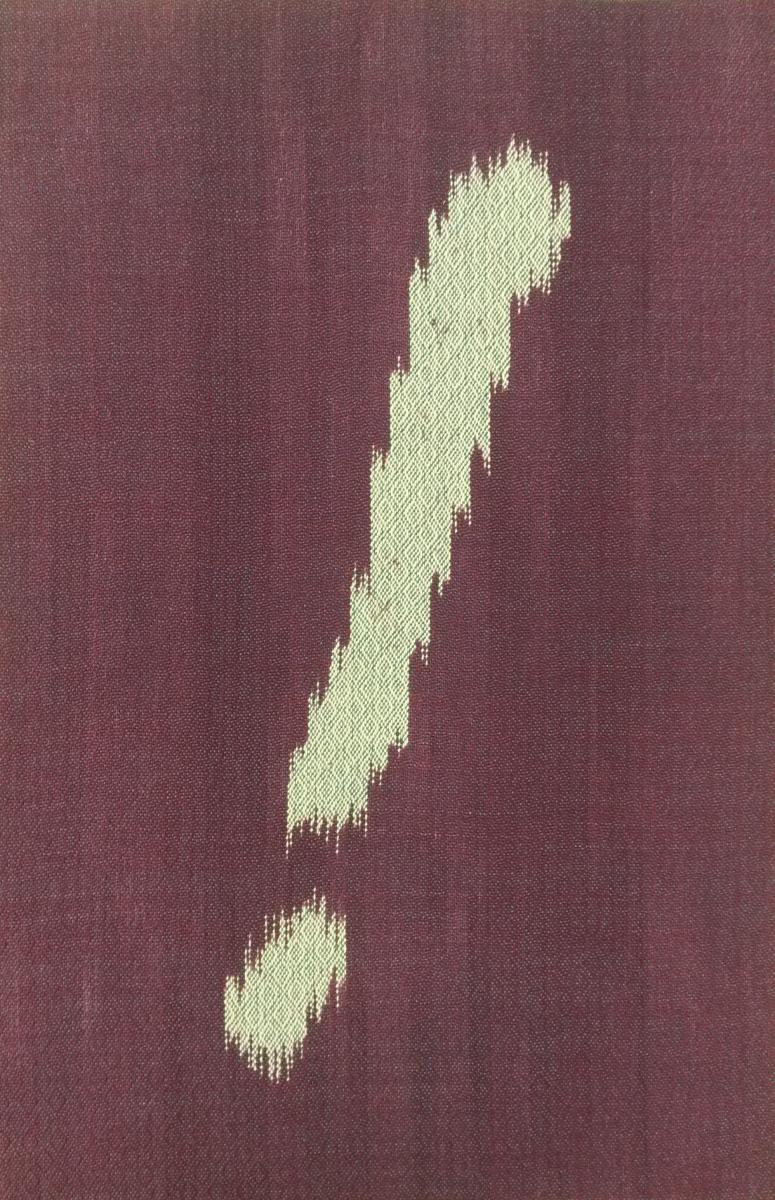 Steel responds well to my need for control over a material. The tools, machinery, and patience it requires to shape steel keeps me always looking for small ways to perfect the efficacy of a particular process. I am drawn in by smooth and gentle lines, compelled to make forms that are solid and quiet. Currently, I am investigating how our built concrete environment is failing from the deterioration of the steel skeletons within. How is corrosion affecting and destroying our concrete buildings, roads, and bridges?

I view family history not as part of the past, but something as likely as our DNA to be passed from generation to generation and shape our everyday lives. When I create my work, I am thinking about how we are molded by our parents, who in turn were molded by their parents, and so on into perpetuity. Whether it is by direct resistance, or with gentle guidance, they usher us down a path into the future. More broadly my work explores themes of secrecy and familiarity. I continue to wonder about whether it is possible to truly know another person. I am trying to understand the things that we keep from each other, and how these secrets or half-truths impact our relationships.

Ceramics, like a handwritten note or a worn book page, evokes memories and timelessness. The vessels I create are scrap paper collages created from suspended fragments of time represented by pieces of letters, hand-pulled prints, newspaper photos, and journal pages. These ceramic vessels reflect the intimacy and the comfort of my handmade journal and my sketchbook. Stoneware or porcelain slabs are draped and collaged together over molds. I try to work quickly. The forms are simple so as to contrast the busy surface and also to suggest immediate use. It appears as if the paper scraps have come to life and lifted themselves into an inviting shape, calling us to pause for a closer look. 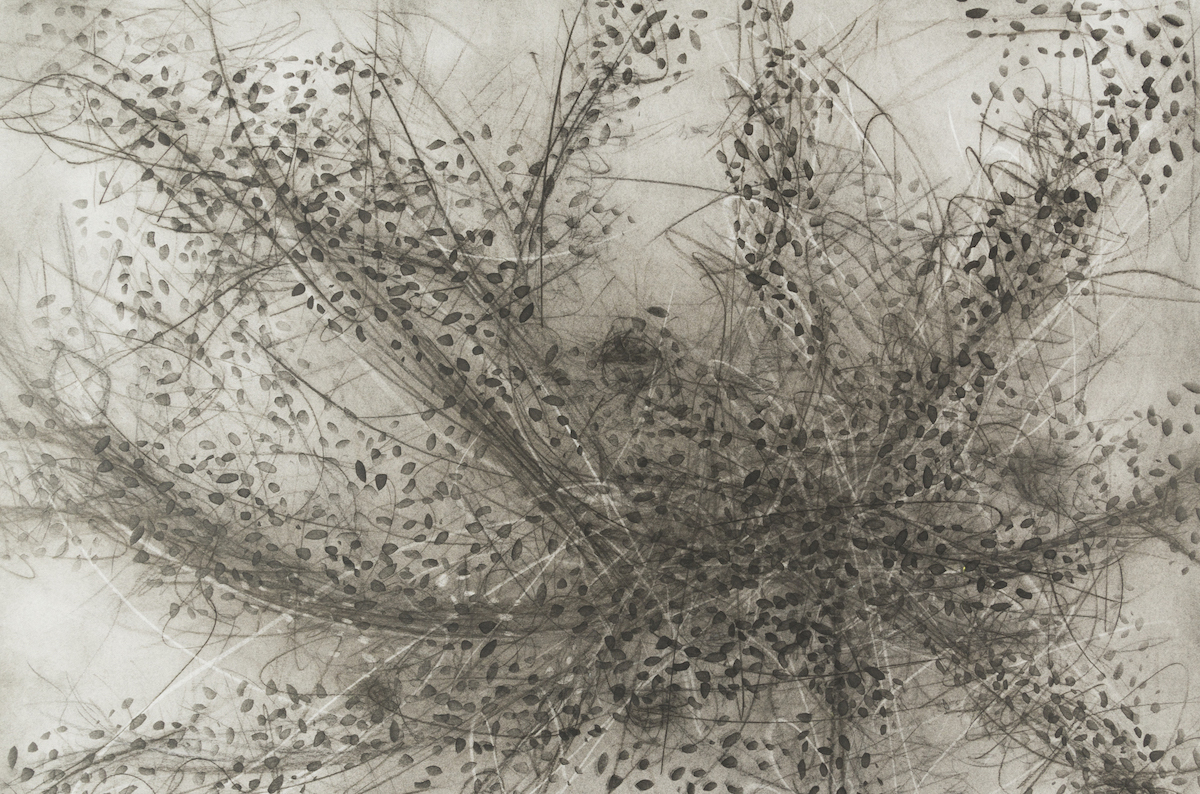 My work investigates instinct and observation. My imagery is fueled by color, line, marks and encounters with my environment. I collect found objects and compose with traces of these manipulated materials. I am innately a collaborator. Working in close proximity to other artists facilitates the sharing of ideas and materials, spawning new creative paths. Each new constellation engenders a different response. The meeting of my materials, process and collaboration inspires chance in the work. Through the use of repetition and process the work becomes a thread of these conversations.

Our lives are filled with objects, from the things we slowly save to buy, to the things that we blindly save. These objects and things, the detritus of life, are ours. They become the definition of what we are, what we do, what we are allowed to do. My work investigates these objects, the simple paper that accumulates, the worry stone picked up on some far off beach, the items within arms reach that allow one to accomplish the day’s tasks. These ubiquitous items are not universally known. Instead the items are specific, imbued with the personality, patterns, and stories of the people who use them. The people whose life they helped shape.

I utilize printmaking processes and the multiple to depict with painstaking attention the aspects that define individual objects, and I use sculpture and participatory actions to engage viewers in the objects’ narrative. In this way I reenact with scrutiny the larger cycles at play, focusing on one singular piece and providing the experience that will create ownership with each person who encounters it.

Born out of play and experimentation this series uses the hot glass studio, flameworking techniques, and neon bending equipment. It is an exercise to see what is possible in soft glass when you utilize multiple studios to make a single body of work. I have combined traditional and technical skills to create playful, atypical objects that deviate from traditional, functional glass forms. Process and technique are at the forefront of my studio practice, play and experimentation is what drives this project and will continue to be incorporated into my routine.

Alluvium and Geomorph are series of wall pieces made of unique groupings of concrete tiles. The designs are a tribute to the masters of tessellation – the creators of traditional Middle Eastern architectural ornament – but is an attempt to find a more contemporary expression through new shapes and that ubiquitous marker of the modern world, concrete.

Concrete represents our most quotidian selves. It is inert and utilitarian. For the most unfortunate it literally imprisons us. But if concrete is associated with convenience over compassion that is only because it is capable of manifesting our true intentions. It is a versatile, highly expressive material and it is the perfect material for casting, for creating multiples, repeats, and pattern.

Alluvium and Geomorph try to access the visual language that lies somewhere between nature and geometry. A drying riverbed contracts and fractures following a predictable pattern, yet its expression is dynamic, artful even. The growth of a plant can be described using what we call the Golden Ratio, the same relationship that artists have found so pleasing in dividing their canvasses. The source material is the same – the strange dictates of our universe. Abstract pattern reveals symmetries and order that lie just under the surface of the visible world. It can also stir in us something that lies just under the surface of our busy, self-obsessed lives.

Refugee is the latest in a series of kinetic sculptures which seek to animate the world in unexpected ways. Making machinery from handmade parts is absurd, but hopefully it can challenge that part of us that accepts the built environment as inevitable and the work of experts. Foxes are the ultimate scapegoats. In folklore they are tricksters and villains, but mostly because they are so nimble and hard to catch. The animal itself is, above all, a survivor. This one is adrift on a raft, fleeing violence and facing uncertainty.

Work and play are generally perceived as opposites, my position as an artist is to showcase this relationship as congruous. A similar mental state can be assumed when both activities occur and, at times, I have found them to be inseparable in my own art practice. Given this often synchronous relationship I see an opportunity to pose questions using formal relationships found in material culture through the production of sculpture and furniture. Changing the ordinary while expecting the common is one way I address space and materiality as it connects to its inhabitants. I use found objects in my work to provide a familiar way to subvert expectation and establish new ways of perceiving the known.

My recent work in textiles focuses on hand-weaving and language. The words text and textile both come from the root texere, meaning “to weave.” This fortuitous connection has guided my interest in exploring how words and cloth both create shared meaning concurrent with personal associations. Work at the loom is especially relevant to my current environment in Appalachia, with strong traditions in hand weaving as well as a fraught recent history of industrial textile production. I see a parallel between how individual threads make up cloth and the way that letters combine into words; in both cases, the parts are so subsumed into the whole as to be rendered almost invisible. My work brings the components back into view, opening space for reflection on the role of individuals in community. In drawing, I take a more intuitive approach, allowing the accretion of action and materials to build forms that explore a sense of volume, density, and pressure. They have a relationship to weight and slow, sedimentary growth of rocks, as well as to the levity and instantaneous formation and evaporation of clouds. Like weaving, these drawings come into being through repetitive movement and through “crossings,” where drawn lines, like the threads of weaving, build an integrated surface out of individual marks. 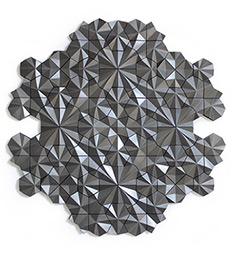 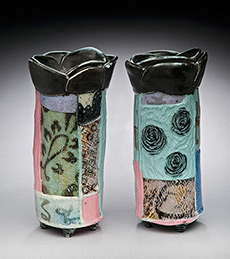 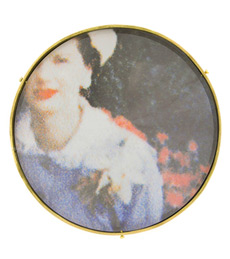 Betsy DeWitt; Upon Closer Examination (2 of 5) 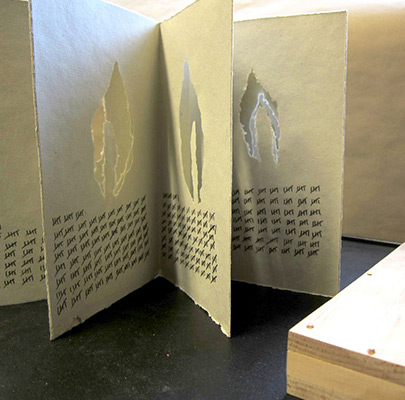 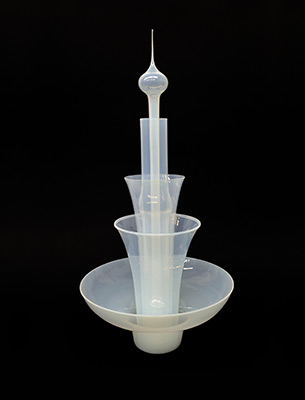