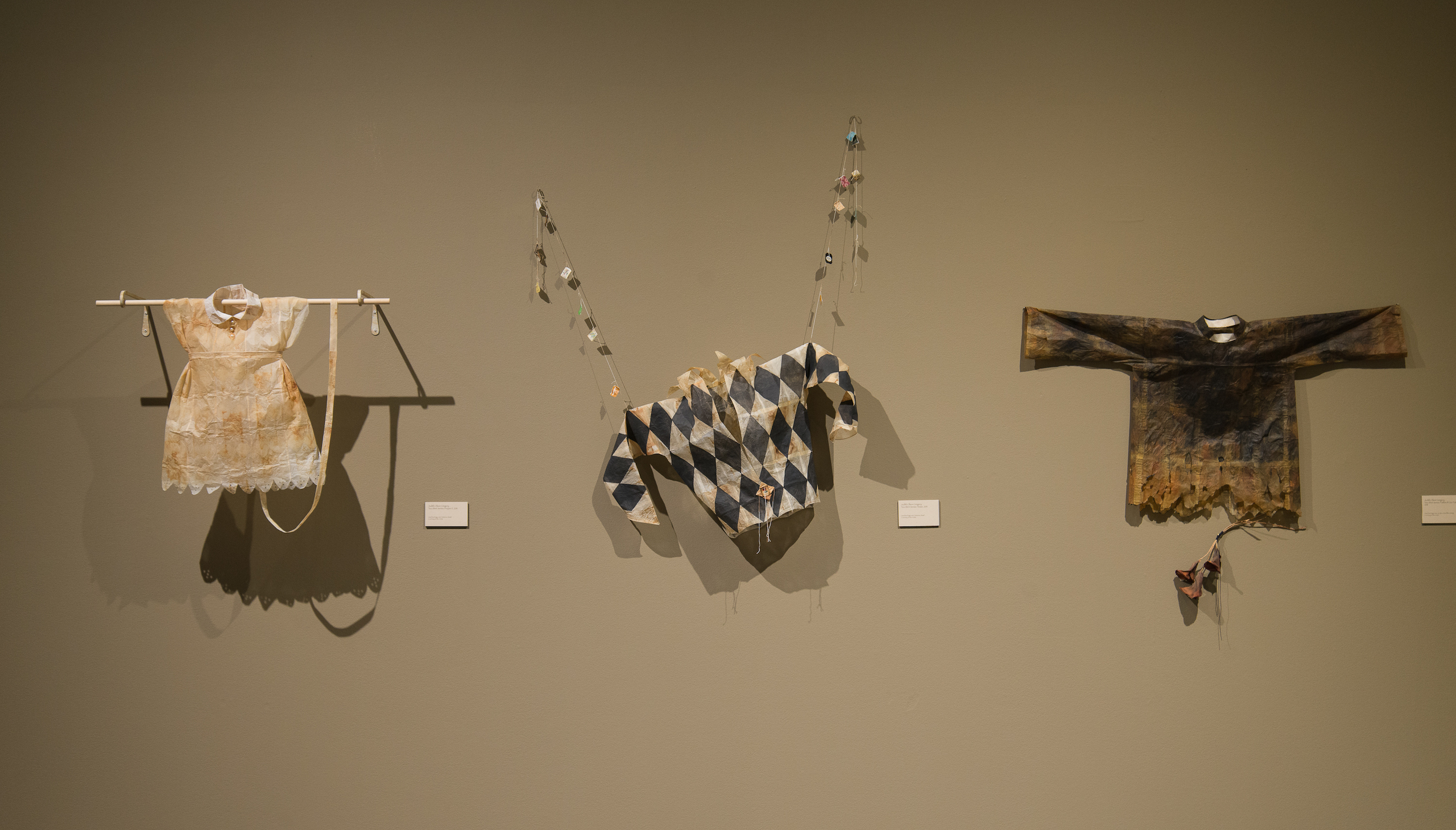 Judith Olson Gregory transforms the Turchin Center’s Gallery A into a tranquil tea house for meditation, contemplation and intimate conversation. As the world rapidly changes outside the walls of the center, sanctuary becomes all the more important as we try to make sense of our place in the universal village through ceremony and interpretation. Constructed from used tea bags and loose tea leaves, Taking Tea creates an immersion in a quiet, delicately scented world. Come for a moment or stay for an hour. The Turchin Center invites visitors to find shelter and inspiration through the visual arts. A university art gallery is a safe place to think and talk about ideas with others regardless of race, religion, gender identify, political persuasion—you name it—with respect and active listening. What better place than a tea house to cross cultural barriers and find common ground. 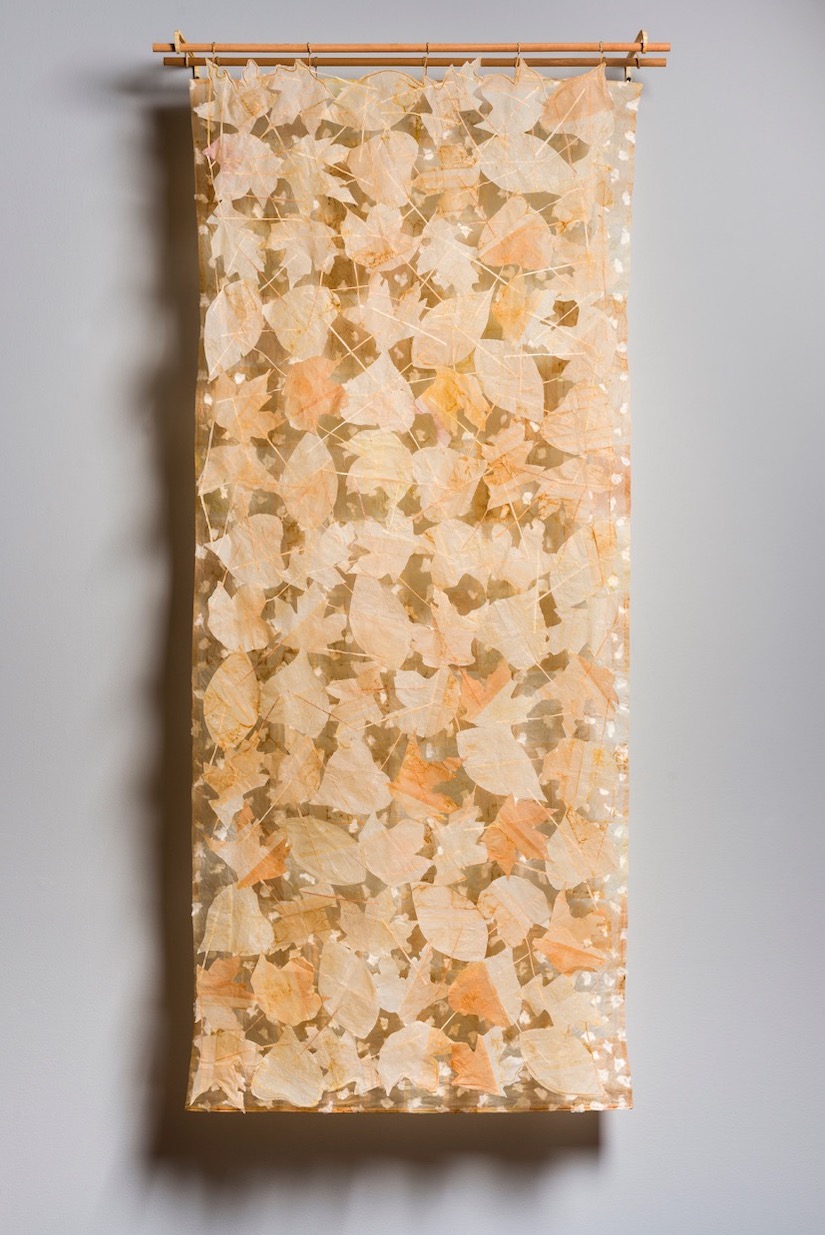 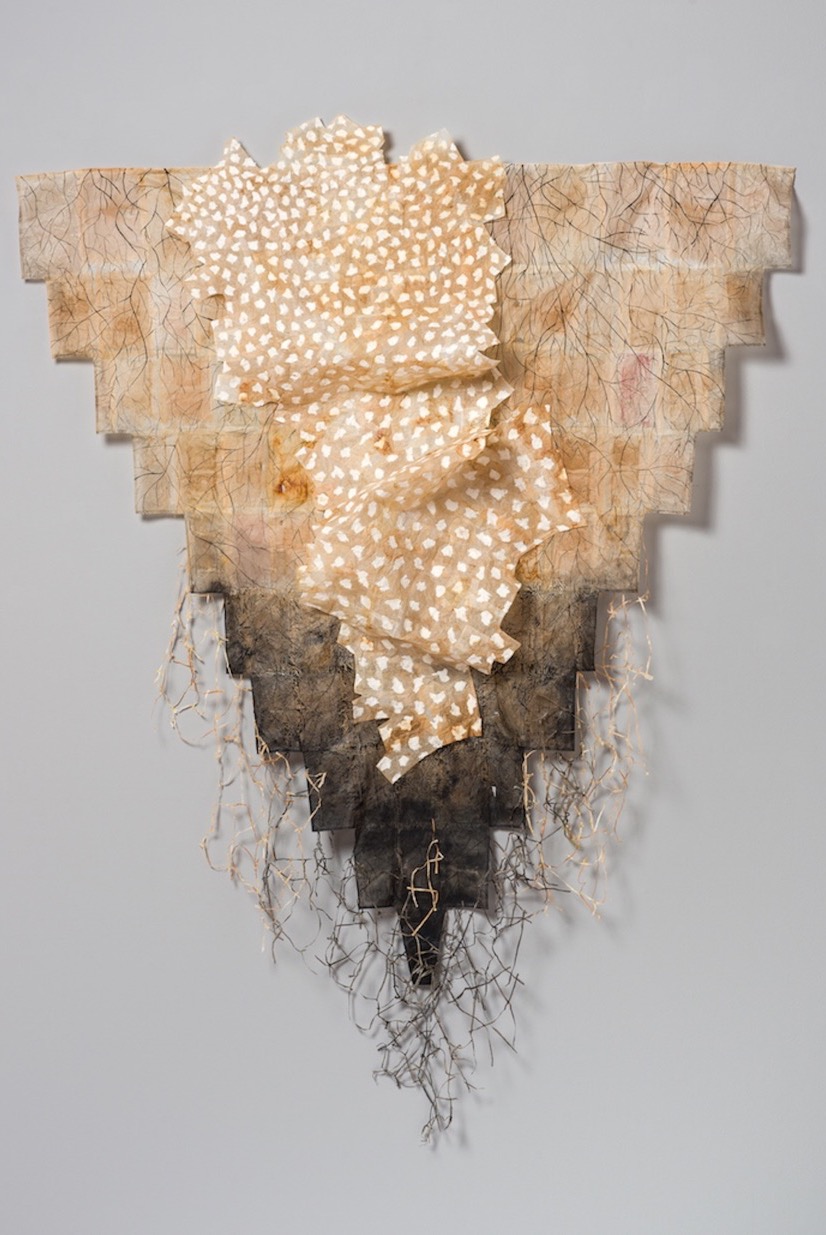 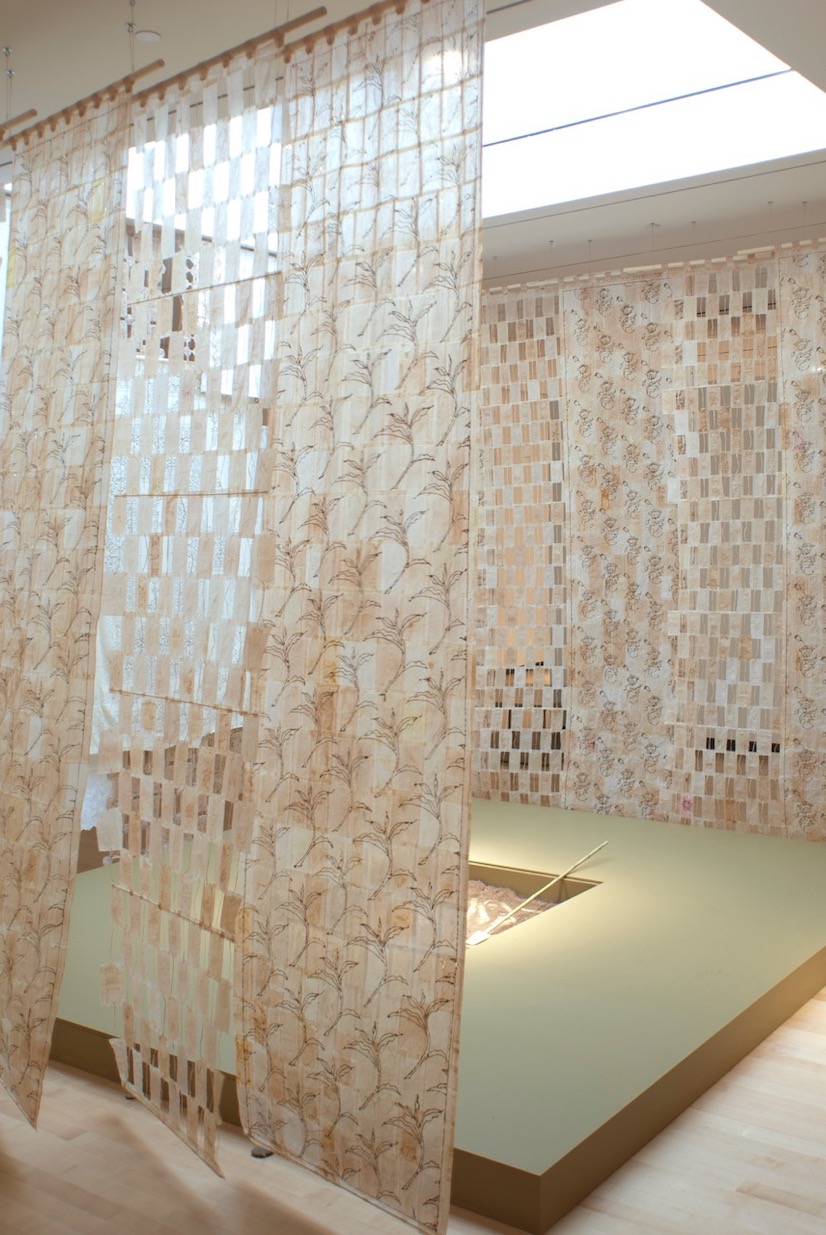 My fascination with the inclusion of used tea bags in my artwork began a number of years ago. Not only do I find that their lightness, transparency and beautifully stained patinas produce a desired ethereal quality in my work, but I’m also inspired by the history of tea itself and the thousands of stories behind each cup the donated tea bags represent. 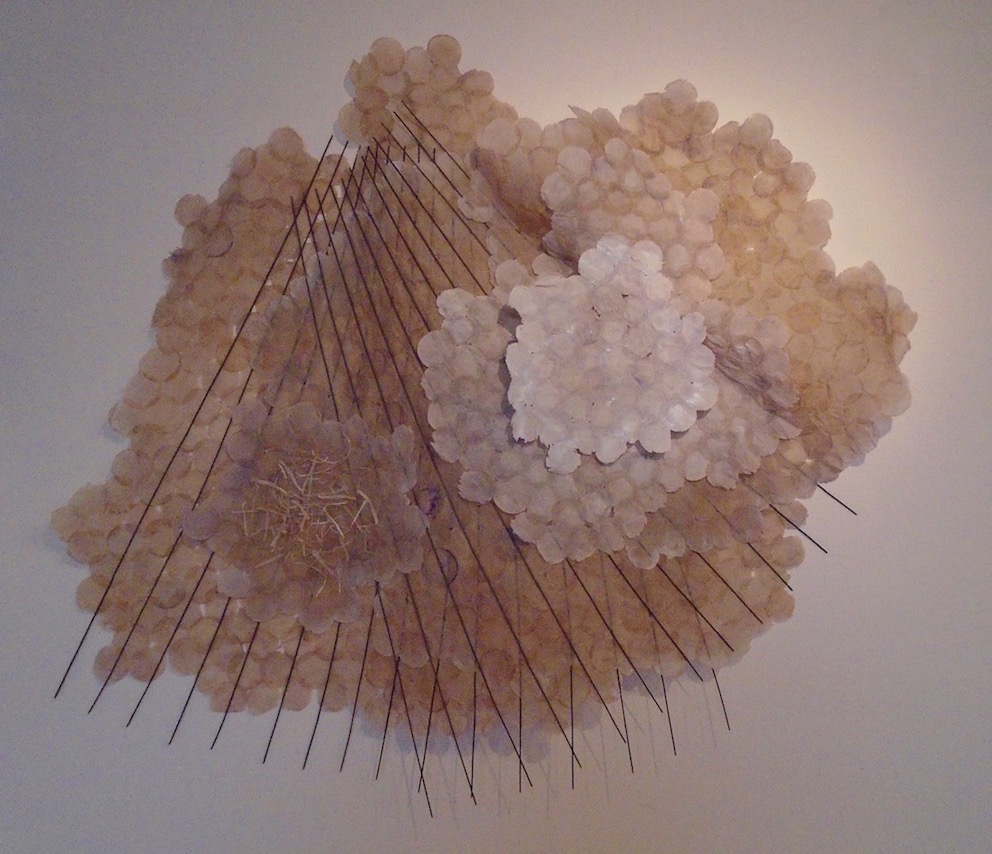 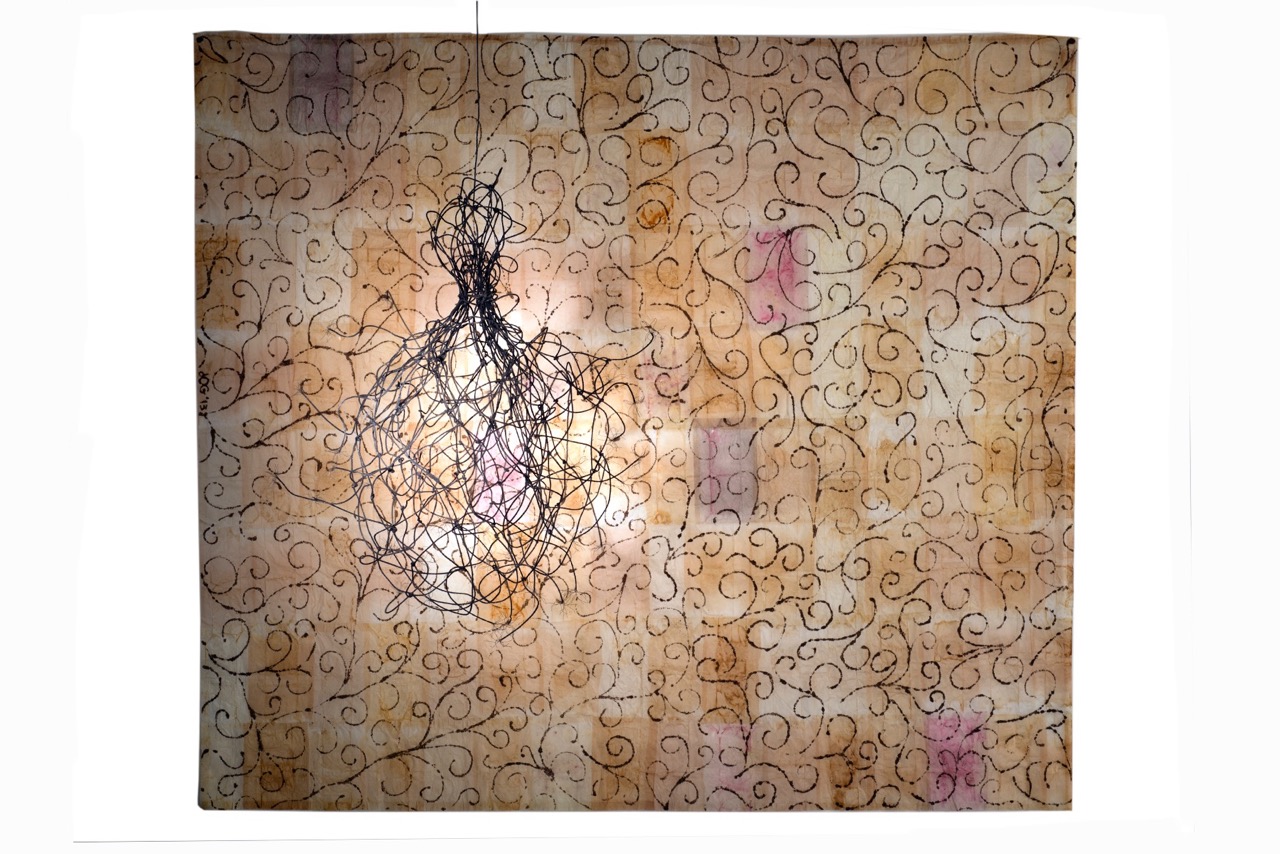 Balancing concept and form in artwork that is equal parts message and memorable visuals has been Judith Olson Gregory’s objective throughout her career. Whether creating individual pieces, a themed series or site-specific installations, her work has been inspired by everything from words and text to found objects. Positions as a commercial artist, teaching artist and arts advocate have complemented and contributed to her professional studio output.
Judith Olson Gregory is a visual artist and arts educator based in Western New York and North Carolina. She received a BFA from Alfred University in 1968 and pursued a career in commercial art before turning her attention to her own work full time in 1980. Gregory’s art often makes use of unusual materials including used tea bags that she dries and brushes with a transparent acrylic medium. She also uses individual pieces of dryer lint, Sports Illustrated calendars, and Heimlich Maneuver posters. Puns figure heavily in the titles and subjects of many of her projects, and she often incorporates text in her pieces.
A native of Jamestown, N.Y. and a summer resident at Chautauqua Institution in Chautauqua, N.Y., Gregory has exhibited across New York State and the nation, including at the Burchfield Penney Art Center in Buffalo, NY, the Memorial Art Gallery in Rochester, NY, and GreenHill Gallery in Greensboro, NC.  She has received fellowships from YADDO in Saratoga Springs, NY, and has work in public and private collections throughout the region. She has also designed and taught numerous workshops for adults and children, received many awards, and served on the boards of several art organizations in the Rochester area and at Chautauqua Institution, where she was president of the Chautauqua Center for the Visual Arts from 1999 to 2001.