Join us as Krista Elrick shares the artistic practice and insight behind her exhibition, Where are the birds? Retracing Audubon, currently being exhibited at the Turchin Center. She will be joined in discussion with Dr. Daniel Wildcat on the connection her artwork makes to Indigenous knowledge and conservation practices.

My photographic contribution to Audubon scholarship begins with an image made of the Lovers Rock at Mill Grove [Montgomery County, Pennsylvania], the secret place where Lucy [Blackwell] and John James [Audubon]secured their life-long partnership. At the bluffs of Cincinnati my collage reflects Audubon’s feelings, “without any money my talents are to be my support, my enthusiasm, my guide.”  Here he began his historic float on the Ohio and Mississippi Rivers into New Orleans in 1820. Another key image is of the Three Buttes Ranch in Montana, where I found that cattle and natural gas rigs replace the wild landscape in which Audubon camped to hunt bison and bear. Such unexpected and ironic changes that have occurred in the landscape he described and depicted make this documentation all the more poignant and revelatory. 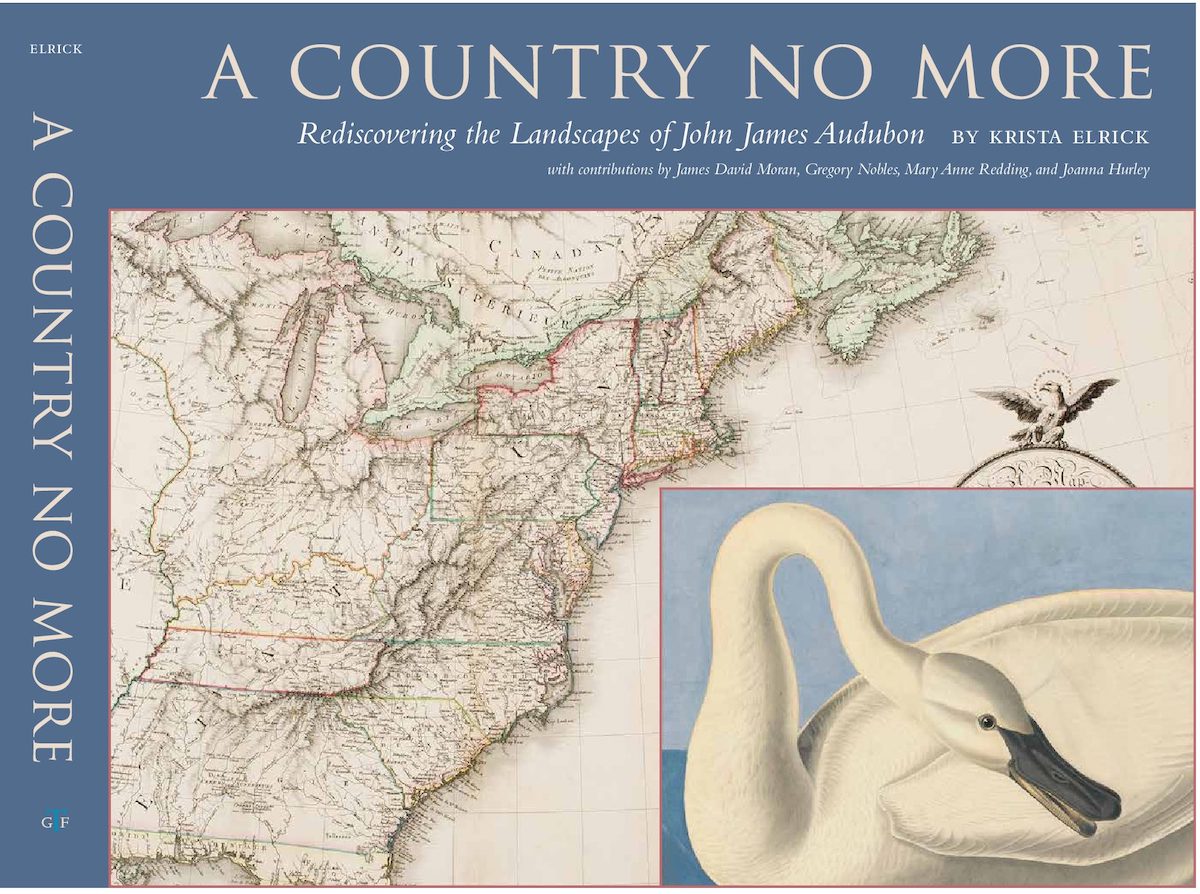 Elrick will also discuss her recent book project “A Country No More, Rediscovering the Landscapes of John John James Audubon”

A book signing will also be included as part of this ARTtalk.

Where are the birds? Retracing Audubon: Krista Elrick 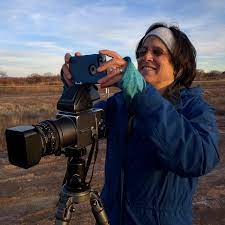 Photographer Krista Elrick is interested in the changes that have occurred in natural ecosystems over prolonged periods of time as a direct result of human intrusion into the landscape. Film-based, in-camera exposures, combined with silver gelatin prints, are the foundation of her creative work.  While her photographic process is rooted in the nineteenth century, it is today’s wetlands, forests, and watersheds that serve as her backdrop. In tandem, migratory birds and the ecosystems that sustain them are the focus of her current body of work. She sees these once harmonious relationships as disrupted. Because of this disruption, she photographs the land in fragments and then construct collages to create newly pieced dynamics.

Elrick’s recent projects include Imagine a City that Remembers: The Albuquerque Rephotography Project, by Anthony Anella and Mark Childs, foreword by V. B. Price, photographs by Krista Elrick (University of New Mexico Press 2018); and Grasslands/Separating Species, with photographs by Krista Elrick, Dana Fritz, David Taylor, Jo Whaley, and Michael Berman with essays by Mary Anne Redding, William deBuys, and Rebecca Solnit (Radius Books 2010) in conjunction with an exhibition at 516 ARTS in Albuquerque.

Elrick received an MFA from Arizona State University in 1990. 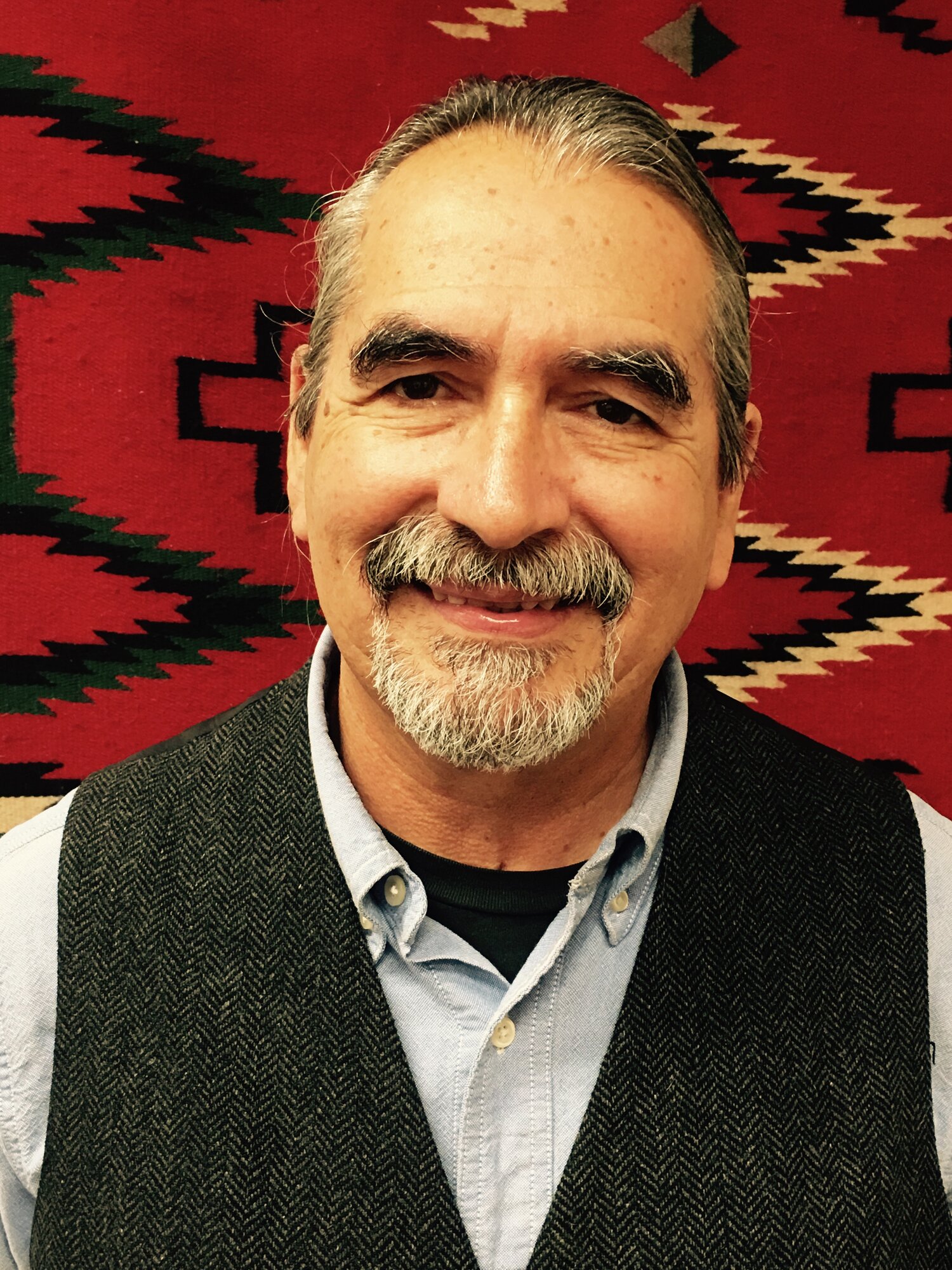 Daniel R. Wildcat is a Yuchi member of the Muscogee Nation of Oklahoma.  He is currently a professor in the Indigenous & American Indian Studies Program at Haskell Indian Nations University in Lawrence, Kansas.  In 2013 he was the Gordon Russell visiting professor of Native American Studies at Dartmouth College. He has served as adjunct faculty for the Bloch School – UMKC for the past decade. Dr. Wildcat received B.A. and M.A. degrees in sociology from the University of Kansas and an interdisciplinary Ph.D. from the University of Missouri at Kansas City.  His service as teacher and administrator at Haskell spans 35 years.

Dr. Wildcat has been an invited speaker on American Indian worldviews at Goddard Space Flight Center, the Smithsonian National Museum of the American Indian, Harvard Medical School, Dartmouth College, University of Kansas Medical School, Miami University, University of California (Riverside) and many other institutions of higher education.  Dr. Wildcat frequently speaks to community groups and organizations on the issues of biological and cultural diversity.  In 1992 Dr. Wildcat was honored with the Heart Peace Award by the Kansas City organization The Future Is Now for his efforts to promote world peace and cultural diversity.

In 1994 he helped form a partnership with the Hazardous Substance Research Center at Kansas State University to create the Haskell Environmental Research Studies (HERS) Center as a non-profit Native American research center to facilitate: 1) technology transfer to tribal governments and Native communities, 2) transfer of accurate environmental information to tribes, and 3) research opportunities to tribal college faculty and students throughout the United States.

In 1996 Dr. Wildcat helped plan and organize an American Indian educational program to celebrate the 25th anniversary of Earth Day where he moderated a live nationally broadcast dialogue between traditional American Indian Elders and American Indian scientists and engineers about the way we must live if we are to ensure a healthy planet for our children.  Dr. Wildcat helped plan and design a four-part video series entitled All Things Are Connected: The Circle of Life (1997), which dealt with land, air, water and biological issues related to environmental science and policy issues facing Native nations.

He is the author and editor of several books: Power and Place: Indian Education In America, with Vine Deloria, Jr.; Destroying Dogma: Vine Deloria’s Legacy on Intellectual America, with Steve Pavlik.  His most recent book, Red Alert: Saving the Planet with Indigenous Knowledge, suggests current environmental issues will require the exercise of indigenous ingenuity – indigenuity – and wisdom if humankind is to reduce the environmental damage underway. He is a co-author on the Southern Great Plains chapter of the Fourth National Climate Assessment.