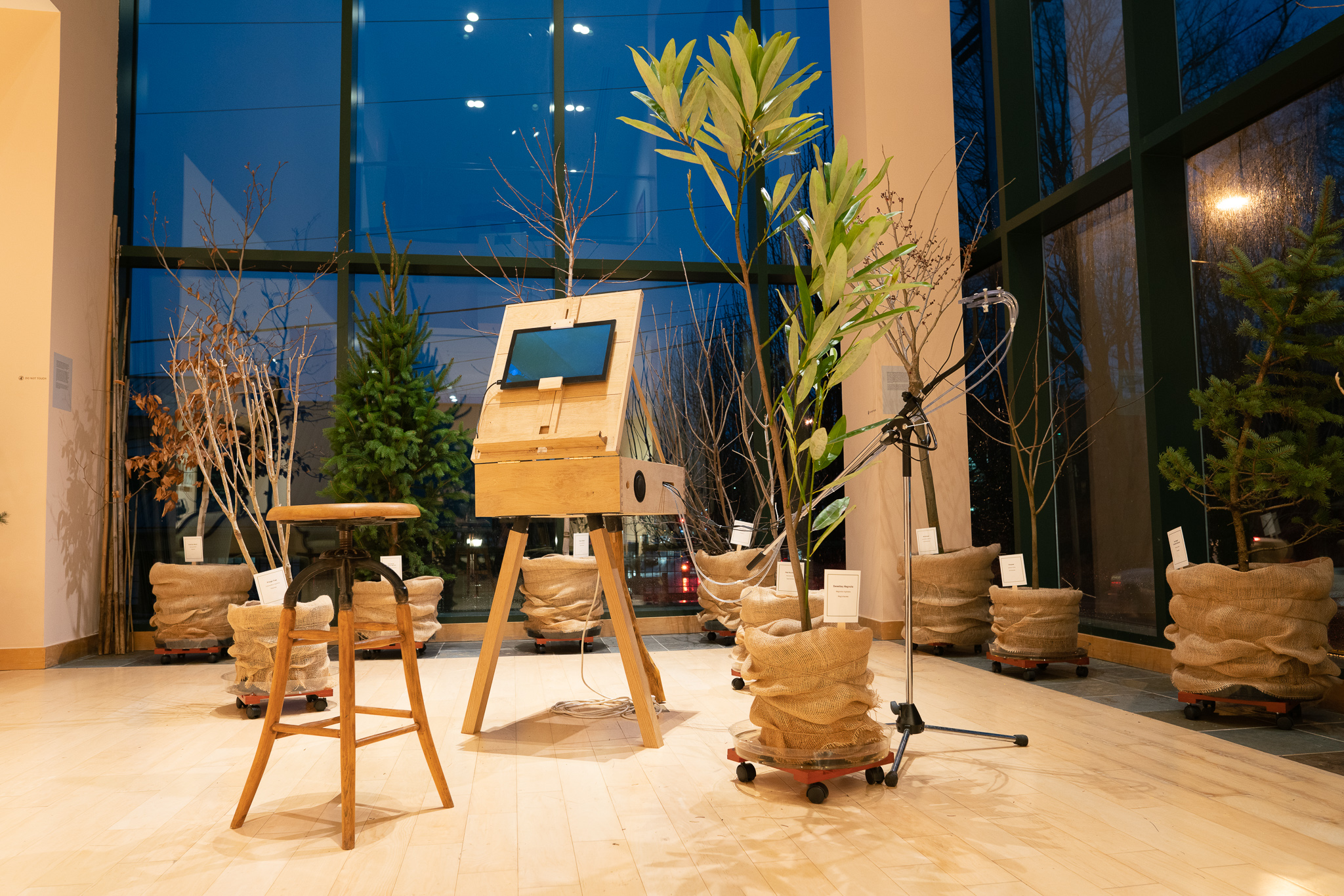 Plein Air: Southern Appalachian Forest: Reiko Goto Collins & Tim Collins in the Mayer Gallery
Anthropogenic climate change has its root causes in over two centuries of greenhouse gases primarily produced by the first and second industrialized nations of the world. Climate change is a narrative of global data largely understood to be a driving force in social and economic changes of 21st century. Trees are the largest living things on earth; forests are often discussed as one aspect of the range of approaches necessary to sequester carbon with the potential to reduce the impacts of climate change. 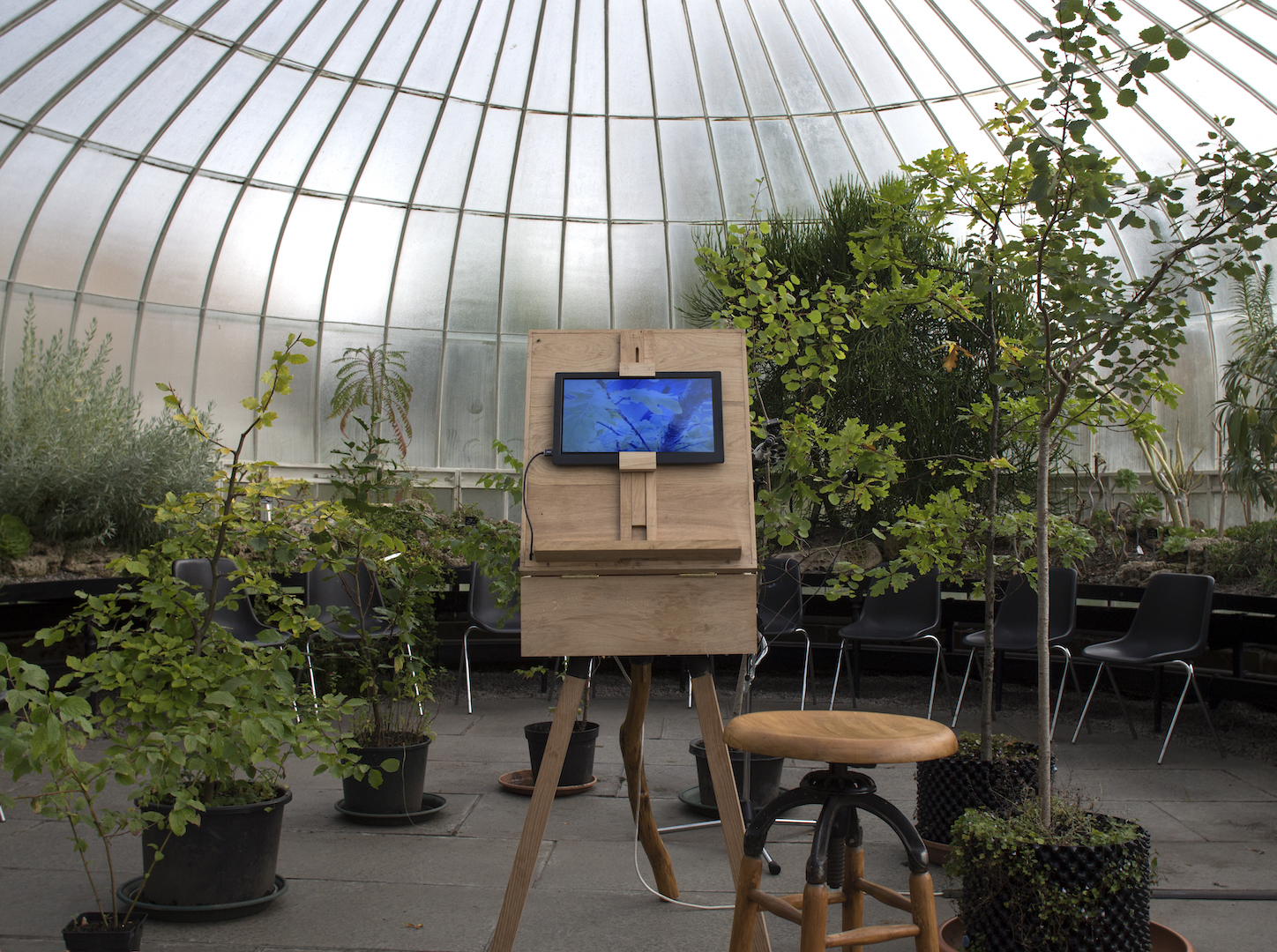 Our interest in Plein Air began by thinking about carbon exchange. The project is about one leaf, one tree. Goto and Collins have worked with a team of scientists, technologists and musicians to construct a hand-crafted box easel for the 21st Century. The goal was to reveal the breath of a tree with the intention to explore the empathic interrelationship we might have with trees. The work integrates aesthetics, ethics and awareness in the pursuit of a better understanding of the limitations of people-plant and culture-nature relationships. The artwork provides an experiential interface to an important but relatively invisible aspect of carbon sequestration.

The experience produced by Plein Air, mediated by sensors and software, lets us hear a metaphor, a sound of one leaf / one tree breathing. Does our sense of moral duty change as we listen? The tree is primarily (commonly) understood as property, as a utilitarian resource and as a non-sentient thing. The presence of trees in our daily lives and their bio-chemical agency can be construed as more public than private. Here the eco-feminist critique of a generative, reproductive body inappropriately subsumed by instrumental private interest and in need of emancipation has some traction (Plumwood 1993, p. 145; Merchant 1996, p. 10-11; Salleh 1997, p. 29).

In this research (following Edith Stein) we have reached out, literally, to the trees. Goto identified the potential for empathic experience through attention to the ‘vigour and sluggishness’ in people, animals and plants. We have also found support for a plant consciousness in the theories and science of Daniel Chamowitz and Anthony Trevawas. The Plein Air instrument has been developed and tested in a series of iterations. Our collaboration with a plant physiologist establishes, on one level, the authenticity of our effort by supporting attention to the quality and method of gathering the data, as well as in the pursuit of programming that would let us hear the tree—through its physiological response. To hear the tree, we had to focus on that idea and control the foreground/background relationships. There is an implied truth and some confirmation of ethical intent in this intention and outcome. The key question is can artwork contribute to the evolution of a tree from a thing to a being of value in the minds of those that chose to engage this artwork?

Art does not fix things, solve problems or predict change. It has a very particular kind of agency that creates a space for comment and discussions that produce surprising changes to extant concepts and experiences. It is in the realm of human discourse related to aesthetic perception and value that art has its most inspirational and significant impact. 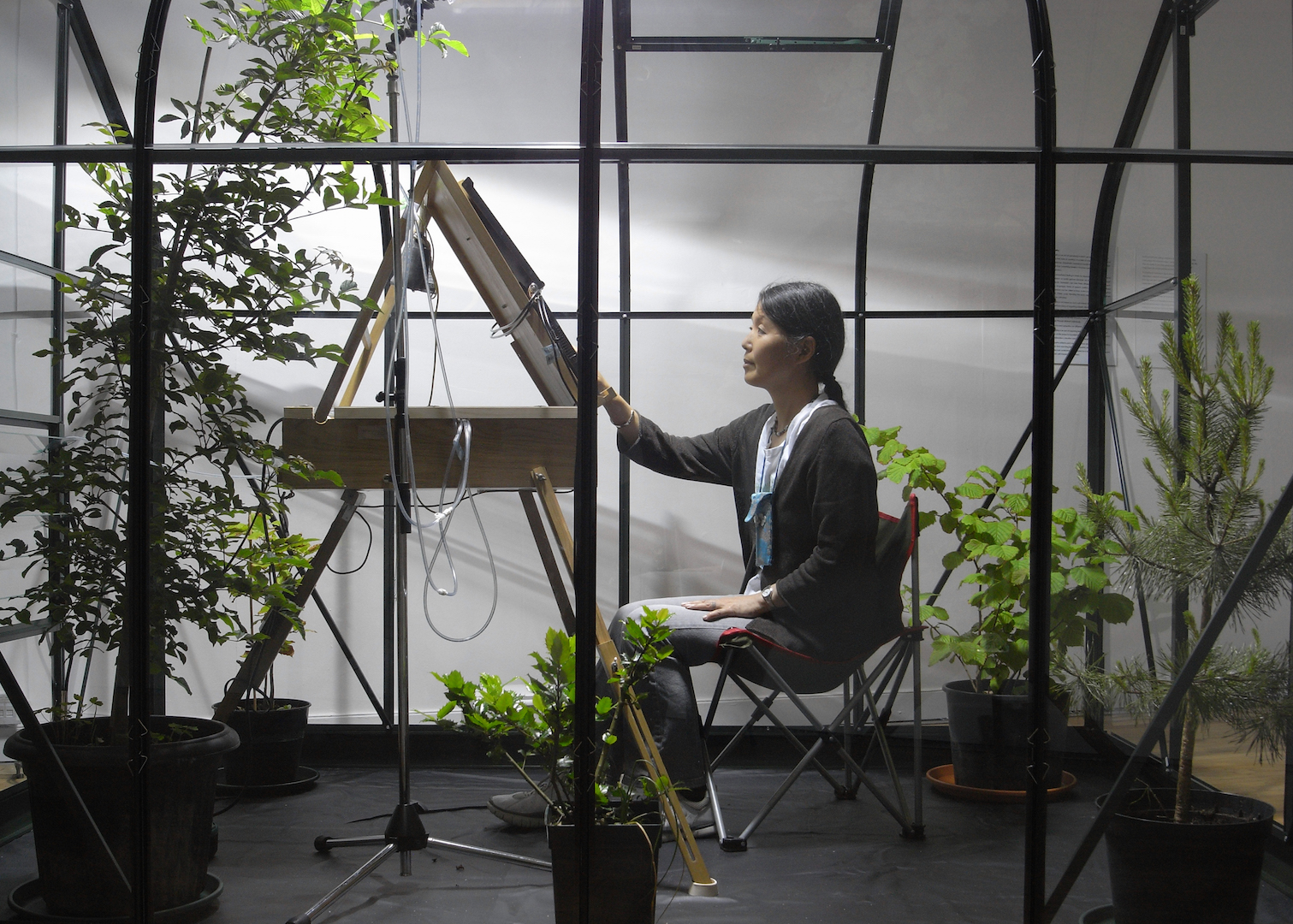 Reiko Goto Collins is a Japanese artist who has lived in both the US and UK; she is a principal in the Collins & Goto Studio. She has been a research fellow at the Institute for Advanced Studies in the Humanities at University of Edinburgh. She participates in an international Climate Change Network: Uncertain Human Futures and is currently involved in a working group on Living Organisms and Their Choices. She is a distinguished research fellow at the STUDIO for Creative Inquiry, at Carnegie Mellon University in Pittsburgh PA.

Tim Collins is from the US; he is an artist, author and planner, a principal in the Collins & Goto Studio and an honorary research fellow in the School of social science at the University of Aberdeen. He works across science, technology and philosophy to develop projects related to nature, culture, changing ideas about ethical duty and public space. In 2017 he was on the development committee for the Art and Artists in Landscape Environment Research Today seminar at the National Gallery in London. He currently serves on the board of directors for the Landscape Research Group and Glasgow Sculpture Studios. 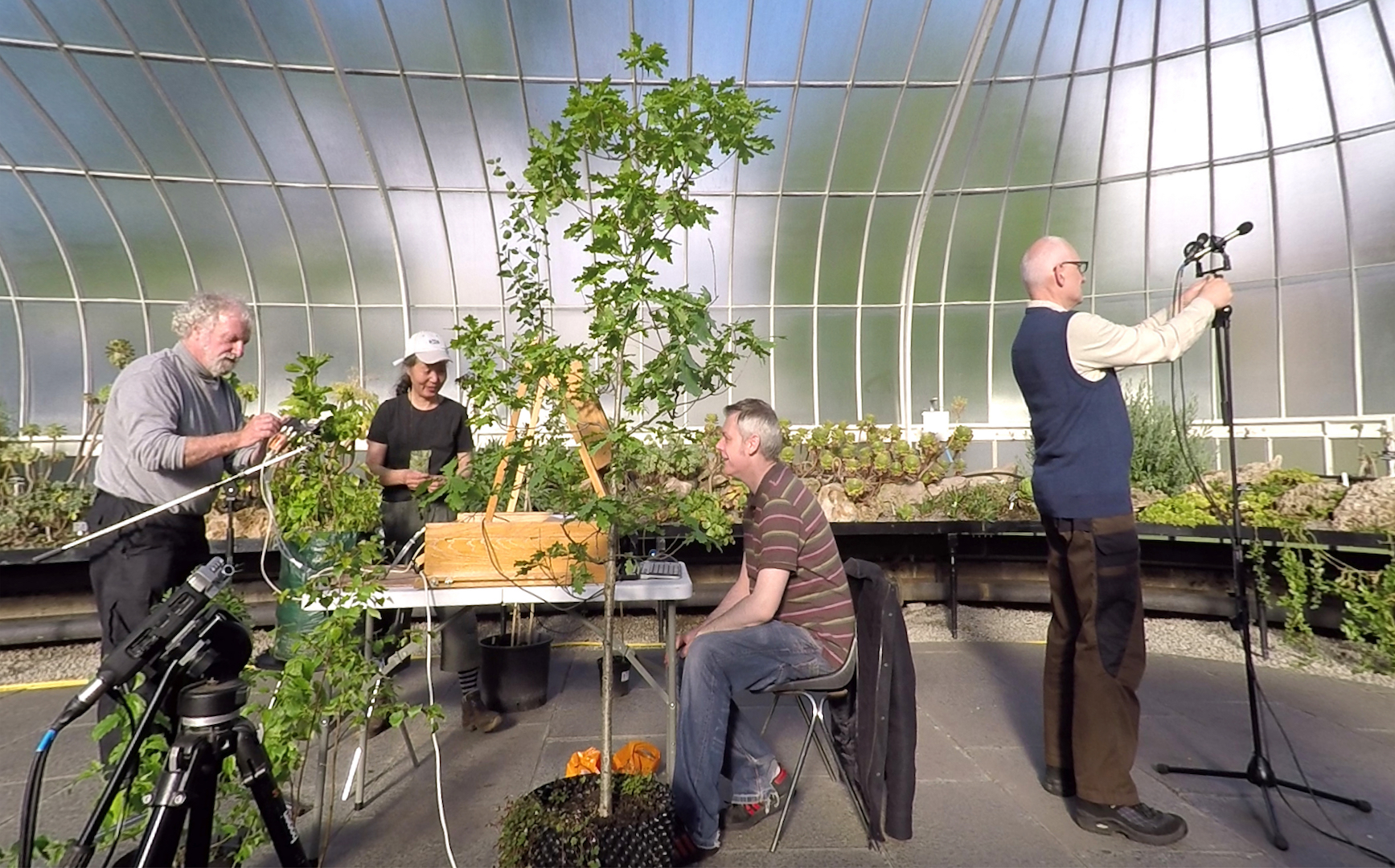 The Collins & Goto Studio;Setting the Stage for a PLEIN AIR Installation

Plein Air Composer/Programmer: Chris Malcolm is a Scottish computer programmer and software developer with over twenty years of experience with vector graphics, sound and interactive systems programming for demanding industry clients. He also has an extensive background in experimental music developing innovative tools and instruments for studio and live performance. Malcolm is recognized within the electronic music scene for his use of retro-computers and consoles to generate unexpected audio and visual experiences. The work with Collins & Goto studio is driven by a curiosity about human relationships to technology as a tool and as an interface to bio-events. The ‘Plein Air’ system and software opens up new programming challenges and levels of expression not available with traditional electronic instruments and methods.

Plein Air Producer: Georg Dietzler is Cologne based artist, author, curator and consultant. He is recognized as an active producer of cross-disciplinary cultural projects exhibitions, seminars and conferences, audio-visual concerts, media dance improv-theatre and more. As a socio-political and conceptual artist with an international reputation he works on ecological future visions, linked to social and political change. His latest artwork a concept for an inner-city citizens heirloom orchard was introduced at ‘Ecovention Europe’ at De Domijnen, in Sittard Netherlands in 2017. The work will be realized in Heerlen-Hoensbroeck as a Butterfly Hierloom Orchard a collaboration by artist Stefan Cools and Georg Dietzler. 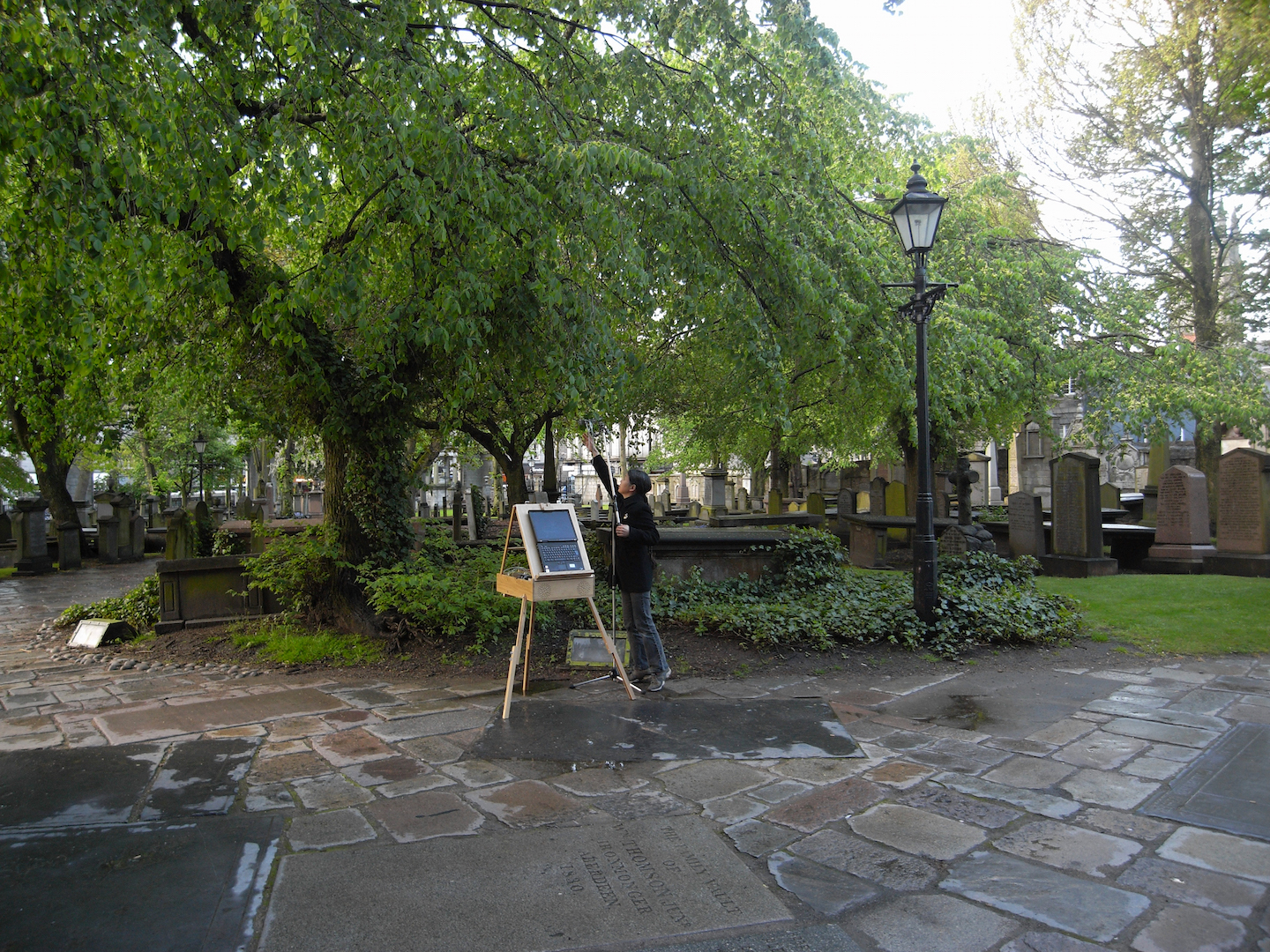 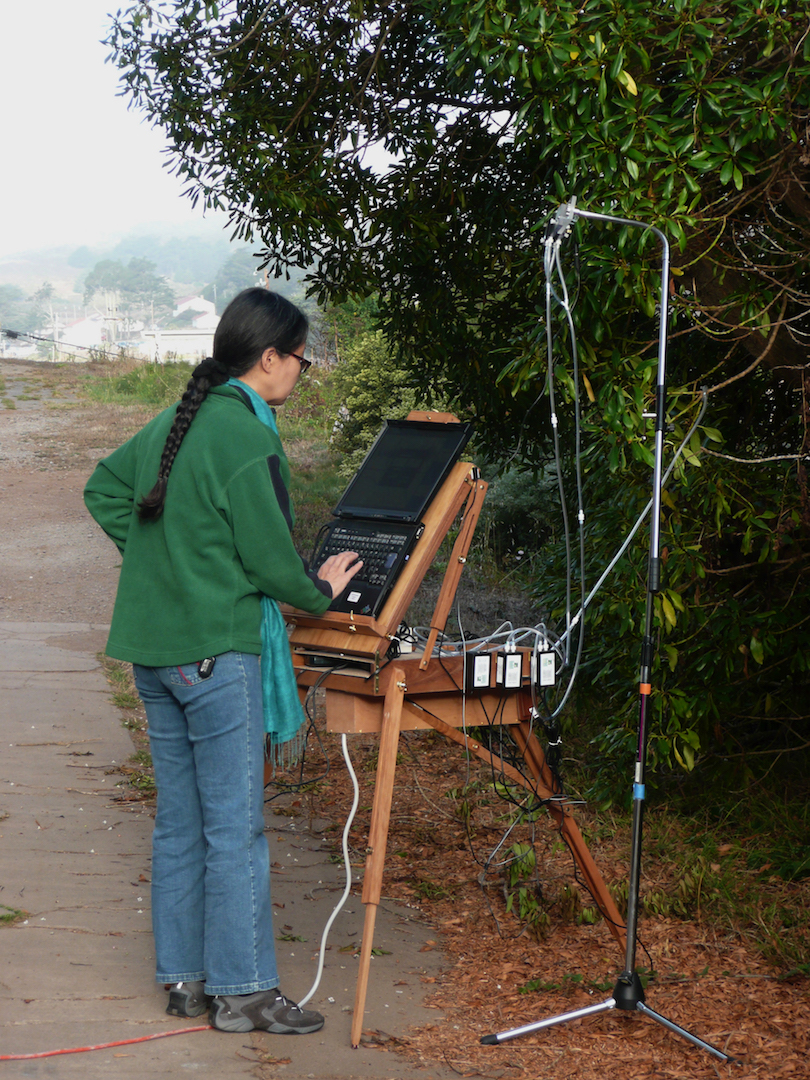