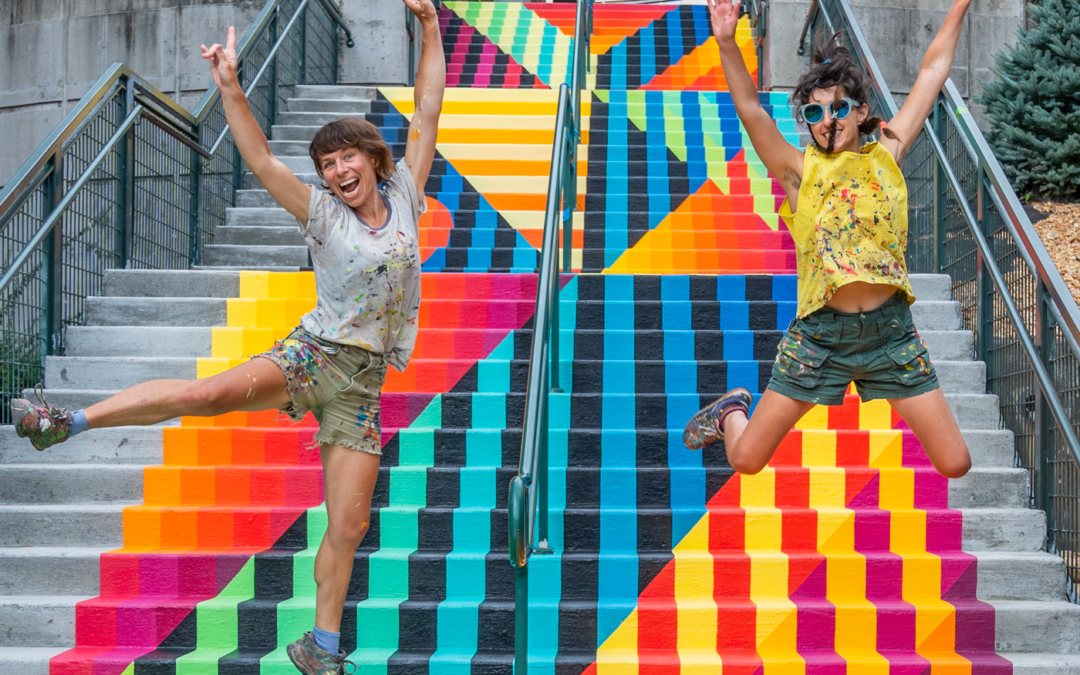 Boone, North Carolina – A stunning site-specific art installation has just been completed on the outdoor grand staircase at the Turchin Center for the Visual Arts. The Turchin Center is situated on King Street and lies at the crossroads of Appalachian State University and downtown Boone and this staircase serves as a pedestrian connector between the two. Several years ago the staff and advisory board at the Turchin Center recognized the imposing concrete staircase as a “blank canvas” with the potential to be transformed into something special. After considering a variety of artists, the dynamic duo of Jessie Unterhalter and Katey Truhn @jessieandkatey were commissioned to transform the stairs into what has become an eye-popping mural.

The concept for the mural takes it cues from textiles and the design is a vibrant and geometric painted stair runner that runs from the top of the 36-step grand staircase, flowing to the bottom of the steps and beyond, and terminating with a fringed edge often found on a rug. From a position at the bottom of the stairs looking up, one can imagine the warp of a weaving loom projected as multi-colored lines run up the entirety of the steps. Though the design is abstract, it is hard not to imagine that the intersecting angles mimic mountains and valleys and a circle conjures up thoughts of the sun rising or setting. Because the stairs are a three-dimensional form, the design takes on a different look when standing at the top of the stairs looking down and the large stair landings are focal points for some of Jessie and Katey’s trademark curving shapes.

Upon completion of the mural, Jessie and Katey spoke about their mission which is a “simple desire to bring playfulness to public spaces and enhance people’s lives through art.” They talked about wanting to create some “visual commotion” that causes people to pause as they intersect with the art. Judging by the number of people who have stopped to visually absorb the now vibrant staircase, have raised their phones to take a photo, or just paused to smile, they have indeed accomplished their goals. Their belief that “aesthetics of one’s environments can influence their emotions and state of mind” is particularly relevant during the Covid-19 pandemic when people are craving experiences that encompass joy.

There is no doubt that the stair mural has a vibrant personality. The only thing it is missing is a name and the Turchin Center invited the community to put on their creative thinking caps and submit suggestions and a winner will be announced soon.